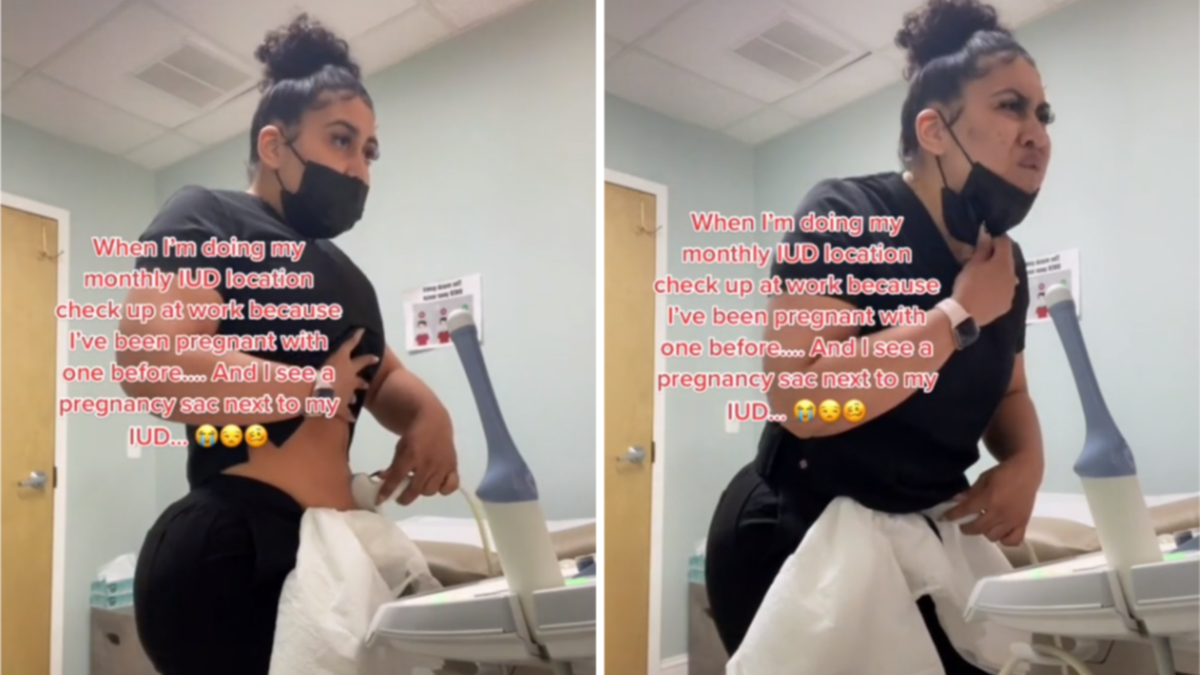 An ultrasound technician was performing a do-it-yourself scan when she discovered she was pregnant for the second time despite having an IUD for contraception.

American woman Scharon took to TikTok to show her reaction when she made the shock discovery.

WATCH THE VIDEO ABOVE: Woman’s shock find after giving herself an ultrasound scan

She checks her IUD, or intrauterine device, once a month to make sure it’s in place.

That’s because she once fell pregnant despite having her IUD in.

But when she performed an ultrasound recently, she discovered another pregnancy sac next to her IUD.

Her expression goes from curious to shocked in an instant as she registers what’s on the screen.

An IUD is a small piece of plastic inserted into the uterus as a contraceptive device.

It is generally regarded as 99 per cent effective – but there’s always that one per cent, and Scharon has been part of that tiny cohort twice.

After posting the video, other IUD users expressed their surprise – and nervousness that the same thing might happen to them.

The video quickly went viral, with more than seven million views in a couple of days.

“My biggest fear,” one person wrote.

“Mine’s been working hard, don’t put that energy on me!”, another exclaimed.

One woman said she had been through the same experience.

“Currently 26 weeks with my copper IUD fail,” another added.

“I have 4 kids, every one of them are birth control babies,” one follower noted.

According to Planned Parenthood, the IUD is “almost mistake proof”.

IUDs are one of the best birth control methods out there — “more than 99 per cent effective”, the website states.

“That means fewer than 1 out of 100 people who use an IUD will get pregnant each year.

“IUDs are so effective because there’s no chance of making a mistake.

“And you’re protected from pregnancy 24/7 for 3 to 12 years, depending on which kind you get.

“Once your IUD is in place, you can pretty much forget about it until it expires.”

That’s cold comfort for Scharon and the other women who left comments after she posted her video.

“I know SO many people who got pregnant on the IUD,” one woman wrote.

“Got pregnant with twins with the Paragard (a type of IUD) after having it for five years,” another revealed.

But other women said they had had no problems.

“I’m on my third IUD and haven’t had a pregnancy scare in 13 years,” one woman shared.

“I had 2 IUDs for a total of 8 years and they never failed me,” another said.

Denial of responsibility! Web Times is an automatic aggregator of the all world’s media. In each content, the hyperlink to the primary source is specified. All trademarks belong to their rightful owners, all materials to their authors. If you are the owner of the content and do not want us to publish your materials, please contact us by email – webtimes.uk. The content will be deleted within 24 hours.
LifestylePregnancy & Births
0
Share FacebookTwitterGoogle+ReddItWhatsAppPinterestEmail