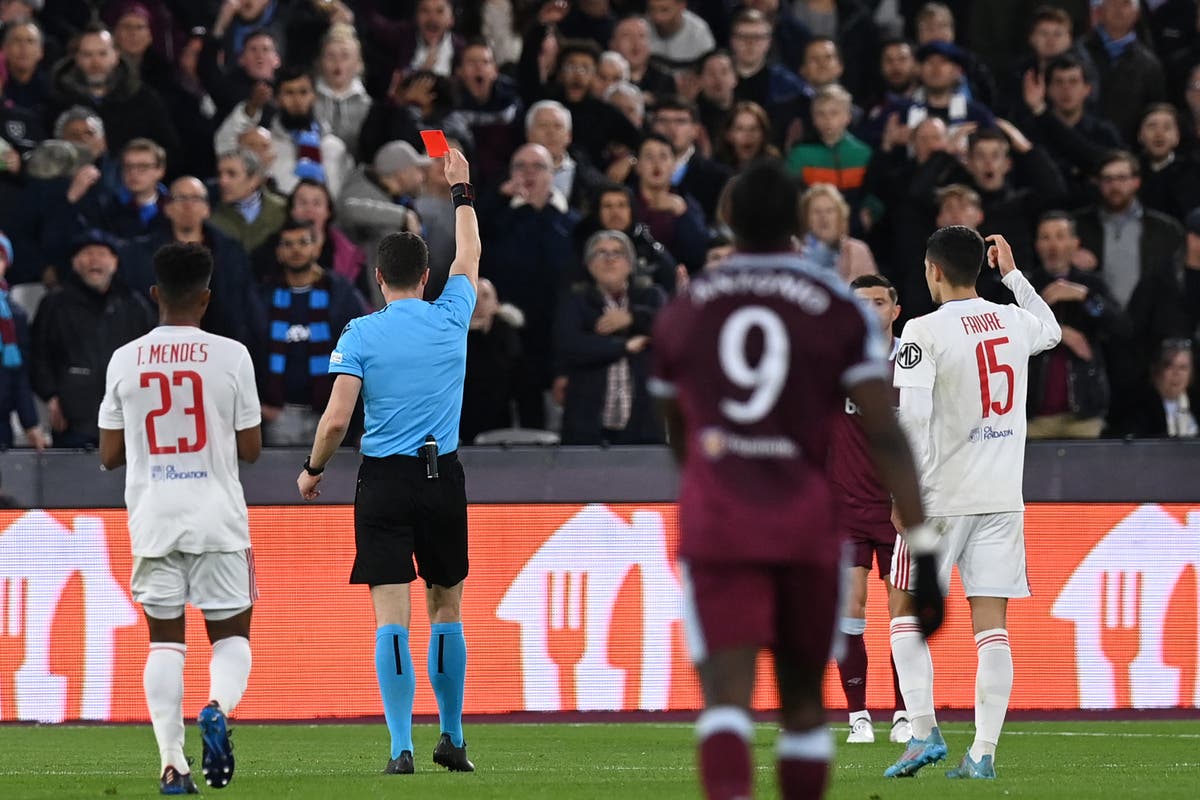 Follow for live coverage as West Ham look to continue their European run as they host Lyon in the first leg of the Europa League quarter-finals. The Hammers knocked out five-time Europa League champions Sevilla in the previous round on an electric night at the London Stadium, and it promises to be another memorable atmosphere as David Moyes’ side aim to take a lead into next week’s second leg in France, with Barcelona potentially waiting in the semi-finals.

West Ham beat 10-man Everton on Sunday to return to winning ways in the Premier League but with Arsenal and Tottenham now ahead of them in the top-four race, the Europa League and extending their European run is becoming the club’s priority. The return of Jarrod Bowen is a boost for the Hammers, with the forward scoring against Everton after having missed the Sevilla tie due to injury. Visitors Lyon are ninth in Ligue 1 but defeated Portuguese leaders Porto in the previous round to reach the last eight.

Follow for live updates from West Ham vs Lyon below, plus scores from Braga vs Rangers and Eintracht Frankfurt vs Barcelona in the other quarter-final ties.

56 mins: That is Jarrod Bowen’s 14th goal of the season in all competitions, four more than any other West Ham player. He has scored two in two games since coming back from injury.

Tanguy Ndombele has an shy from range and smokes it wide of the right hand post!

52 mins: Incredible scenes! Michail Antonio receives a cleared ball and drives it up the pitch for West Ham. He loses it inside the box and asks for a penalty that doesn’t come. The Hammers recover the ball quickly after Anthony Lopes restarts play and Pablo Fornals drives it into the box. He threads the ball into the middle where Jerome Boateng fails to control it. The ball rolls over to the arriving Jarrod Bowen who guides it at goal. Boateng jumps in front of the shot but can only deflect it ove his own goalkeeper to give West Ham the lead!

51 mins: Gusto has put a couple of teasing crosses into the box from the right wing with Dembele the main target but so far West Ham have dealt with them well. Craig Dawson bossing the middle of the penalty area and winning the initial ball.

48 mins: Houssem Aouar makes a decent run down the left side and is given the ball. He shifts it nicely around Ryan Fredericks but his cut back into the box is met by Declan Rice who belts it clear.

The Irons are playing with a low deep block with Michail Antonio the target man for any clearances.

If the other two Europa League games Eintracht Frankfurt are leading 1-0 against Barcelona and Sporting Braga have the lead against Rangers.

Kick off: West Ham are out early for the second half. They’re down to 10-men now and have a tough 45 minutes ahead of them. They’re a threat on the counter so they’ll defend deep and look to hit Lyon on the break.

Said Benrahma is taken off at the break to bring on defensive reinforcements as Ben Johnson slots into the back line.

Aaron Cresswell is the first ever West Ham player to be sent off in major European competition (excluding qualifiers).

As the teams walked off at half-time David Moyes gave an earful to German referee Felix Zwayer who then booked the West Ham manager.

The referee hasn’t had the best night so far.

It was a tentative and tactical first 45 minutes at the London Stadium with neither team managing to put themselves in front.

West Ham created the best chance through a Said Benrahma break but Lyon came close with a couple of efforts from range.

The game changing moment came right at the end of the half as Aaron Cresswell stopped Moussa Dembele’s run into the box to deny Lyon a goal scoring opportunity and send West Ham down to 10-men.

45+5 mins: There’s time for Lyon to take the resultant free kick and they win a corner that West Ham then defend well to end the first half.

Huge controversy surrounding Aaron Cresswell’s red card. Was it a clear goal-scoring opportunity? That’s very much up for debate.

45+2 mins: Red card! Right on the stroke of half-time Aaron Cresswell is sent off!

16 Best Breakfast in Austin Spots, According to Our Team