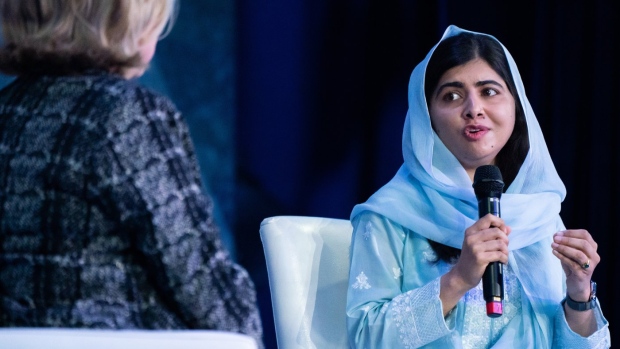 NEW YORK —
Water.org announced a US$1 billion plan Tuesday to help 100 million people in Africa, Asia and Latin America get lasting access to water and sanitation.

The Water.org Water & Climate Fund, unveiled at the Clinton Global Initiative conference in New York, plans to use $50 million in philanthropic money to create a billion-dollar investment portfolio to help bring new water delivery and wastewater treatment projects to underserved communities, then use those communities’ utility bills to fund further projects. Amazon donated the first $10 million of philanthropic money needed for the fund.

It was the day’s largest proposal at the conference, which convened world leaders from politics, business and philanthropy for the first time since 2016. And it showed how the conference encourages nonprofits to take on increasingly ambitious projects to tackle the world’s toughest problems.

Actor and water access activist Matt Damon said he and his water.org co-founder Gary White are “CGI OGs,” because of their long ties to the conference, and that he worried about making his first commitment in 2009 because he was afraid to let people down.

On Tuesday, he encouraged attendees not to worry about that. “Please don’t be afraid to engage,” he said.

It’s a message that echoed throughout the two-day conference.

“The world needs heroes,” said Joseph Deitch, founder of the Elevate Prize Foundation. Nobel laureate Malala Yousafzai won the foundation’s $250,000 Elevate Prize Catalyst Award, which the 2014 Nobel Peace Prize winner said she will use to add 80 new advocates for girls’ education in nine countries. She also plans to use the platform to raise awareness about the plight of girls in Afghanistan who, since the Taliban takeover, are no longer allowed in secondary schools.

“Afghanistan girls have seen what it means to be educated,” she said. “They will fight.”

Carolina García Jayaram, CEO of the Elevate Prize Foundation, said in an interview that the purpose of the award is to amplify the message of advocates like Yousafzai. “It’s how we inspire the world to feel more agency to do good,” she said.

Sasha Fisher, co-founder and executive director of nonprofit Spark MicroGrants, came to CGI seeking partners to provide $25 million to expand training and support programs in villages across Africa. The additional funding would be used to bring its community-building work to between three and five more countries.

“The things that are most scalable are also the most decentralized, so governments love the approach of getting small grants to villages to launch local projects and local businesses to accelerate economic development in their area,” Fisher said. “They know that it’s going to work if it’s started by people in that village.”

Villages that received funds from Spark MicroGrants weathered the pandemic better than those that didn’t, according to the nonprofit. Those villages have also seen an increase in female leadership and a decrease in domestic violence.

Dr. David Fajgenbaum’s new nonprofit Every Cure hopes to match generic drugs with rare diseases that currently have no treatment. It’s a process that he knows has potential because he used it to treat his Castleman’s Disease, a rare ailment where the immune system attacks vital organs.

“This is a huge issue,” Fajgenbaum said. “There are drugs at your neighbourhood pharmacy that could cure you or someone you love, but the system is not built to uncover them.”

He chose to announce his nonprofit at CGI because it lets him tell his story with “the right people in the room.”

“I can share about how I’m alive because of one of these drugs and hopefully inspire people to want to support this work,” Fajgenbaum said.

His presentation was certainly effective. Fajgenbaum received a standing ovation from the full CGI crowd. And former President Bill Clinton had already been won over.

“What I think could be great is if the president’s cancer program could do this for peanuts compared to what it costs to launch major medical research,” Clinton told The Associated Press in an interview. “They might save a lot of lives.”

Associated Press coverage of philanthropy and nonprofits receives support through the AP’s collaboration with The Conversation US, with funding from Lilly Endowment Inc. The AP is solely responsible for this content.

Denial of responsibility! Secular Times is an automatic aggregator of the all world’s media. In each content, the hyperlink to the primary source is specified. All trademarks belong to their rightful owners, all materials to their authors. If you are the owner of the content and do not want us to publish your materials, please contact us by email – seculartimes.com. The content will be deleted within 24 hours.
blue originbreaking newsCanadaCanada climate changecanadiancanadian newsClimateClimate change
0
Share FacebookTwitterGoogle+ReddItWhatsAppPinterestEmail

How to flip houses in an inflated economy