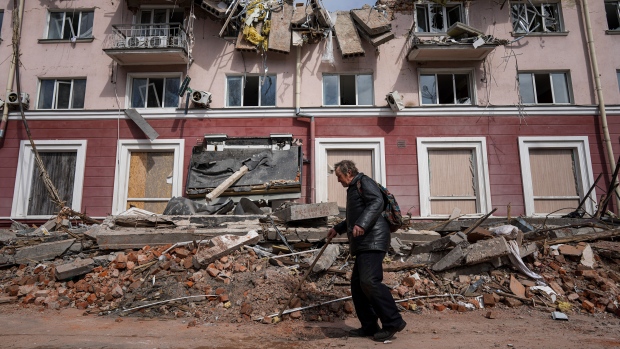 What’s happening in Ukraine on Thursday and how are countries around the world responding? Read live updates on Vladimir Putin and Russia’s invasion of Ukraine.

MOSCOW — Kremlin spokesman Dmitry Peskov has acknowledged that Russia has suffered “significant losses of troops” during its military operation in Ukraine.

Peskov said: “Yes, we have significant losses of troops and it is a huge tragedy for us.”

Speaking in an exclusive interview with British broadcaster Sky on Thursday, Peskov also hinted that the operation might be over “in the foreseeable future.” He said that Russian forces were “doing their best to bring an end to that operation.”

He said: “And we do hope that in coming days, in the foreseeable future, this operation will reach its goals, or we’ll finish it by the negotiations between Russian and Ukrainian delegation.”

The 20 Bushmasters cost 50 million in Australian dollars, which is US$37 million in U.S. dollars.

The vehicles are in addition to $116 million in Australian dollars ($87 million in U.S. dollars) in military and humanitarian aid previously committed to Ukraine.

Zelenskyy requested Bushmasters when he made a video address to the Australian Parliament on March 31.

“And as soon as he asked, we said yes,” Morrison said.

WASHINGTON — The Biden administration on Thursday announced it is levying sanctions against Russia’s largest military shipbuilding and diamond mining companies.

The move blocks their access to the U.S. financial system as the United States looks to exact more economic pain on President Vladimir Putin for the invasion of Ukraine.

Alrosa generated over US$4.2 billion in revenue in 2021. Diamonds are one of Russia’s top 10 non-energy exports by value.

The State Department also said it was blacklisting the United Shipbuilding Corporation, as well as its subsidiaries and board members.

The moves against the two-state owned companies come a day after the U.S. announced it was targeting the two adult daughters of President Vladimir Putin, two of Russia’s largest banks and banning new American investment in Russia.

LVIV, Ukraine — Ukrainian President Volodymyr Zelenskyy said Thursday night that work has begun to dig through the rubble in Borodianka, another city northwest of Kyiv that was occupied by the Russians.

He also said “it is much scarier” there, with even more victims of the Russian troops.

In his daily nighttime video address to the nation Thursday, Zelenskyy said the Russians were preparing to shock the world in the same way by showing corpses in Mariupol and falsely claiming they were killed by the Ukrainian defenders.

Fedoruk said hundreds have been killed and investigators are finding bodies in yards, parks and city squares.

PHOENIX — A Ukrainian diplomat pleaded for the United States to send weapons to his beleaguered nation in a speech to the Arizona Legislature on Thursday.

Kushneruk said it’s a “war for the soul of humanity” and time is of the essence as Russia regroups for an expected offensive on the Donbas region of Eastern Ukraine.

According to Kushneruk, prompt American help will save civilian lives and he pleaded for people not to look away even as the war drags on.

The speech continued the outreach by Ukrainian President Volodymyr Zelenskyy’s government to political and cultural institutions around the world.

He also said that it further demonstrates how Russian President Vladimir Putin’s war “has made Russia an international pariah.”

The vote on Thursday was 93-24 with 58 abstentions

In a statement, Biden said the images out of Bucha and other areas of Ukraine as Russian troops withdraw are “horrifying” and “an outrage to our common humanity.”

BRUSSELS — European Council president Charles Michel says the bloc’s top diplomat has proposed adding an additional 500 million euros (US$544 million) to Ukraine under the “European Peace Facility,” the fund which has been used for the first time during the war to deliver defensive lethal weapons to a third country.

The EU has previously agreed to spend 1 billion euros ($1.1 billion) on military supplies for Ukrainian forces in an unprecedented step of collectively supplying weapons to a country under attack.

EU countries and NATO have so far excluded the option of a direct military intervention in Ukraine.

“Once swiftly approved this will bring to 1.5 billion the EU support already provided for military equipment for Ukraine,” Michel said in a message posted on Twitter in which he thanked EU foreign affairs chief Josep Borrell.

The proposal needs to be approved by the 27 EU countries. The EU said the instrument should help Ukraine armed forces “defend the country’s territorial integrity and sovereignty” and protect the civilian population.

The World Health Organization has verified more than 100 “attacks on health care” in Ukraine since the country was first invaded more than a month ago, the organization’s top official said Thursday.

At least 103 attacks on hospitals and other health-care facilities in the country, and at least 73 were killed and 51 injured in those incidents, said WHO Director-General Dr. Tedros Adhanom Ghebreyesus, speaking at a news conference in Washington, D.C.

The toll includes medical workers as well as patients, he said.

He praised the United States for supporting international health efforts in Ukraine, including the delivery of more 180 metric tons of medical supplies to hard-hit areas. “We are outraged that attacks on health care (in Ukraine) continue,” he said.

BRUSSELS — European Union nations have approved new sanctions against Russia, including an EU embargo on coal imports in the wake of evidence of torture and killings emerging from war zones outside Kyiv.

The ban on coal imports will be the first EU sanctions targeting Russia’s lucrative energy industry over its war in Ukraine, said an official on condition of anonymity because the official announcement had not yet been made.

The EU ban on coal is estimated to be worth 4 billion euros (US$4.4 billion) per year. In the meantime, the EU has already started working on additional sanctions, including on oil imports.

PARIS — The International Energy Agency says its member countries are releasing 60 million barrels of oil from their emergency reserves on top of previous U.S. pledges to take aim at energy prices that have soared since Russia invaded Ukraine.

The Paris-based organization said Thursday that the new commitments made by its 31 member nations, which include the United States and much of Europe, amount to a total of 120 million barrels over six months. It’s the largest release in the group’s history.

Half of that will come from the U.S. as part of the larger release from its strategic petroleum reserve that President Joe Biden announced last week.

The IEA agreed last Friday to add to the amount of oil hitting the global market. It comes on top of the 62.7 million barrels that the agency’s members said they would release last month to ease shortages.

Do you have any questions about the attack on Ukraine? Email dotcom@bellmedia.ca.