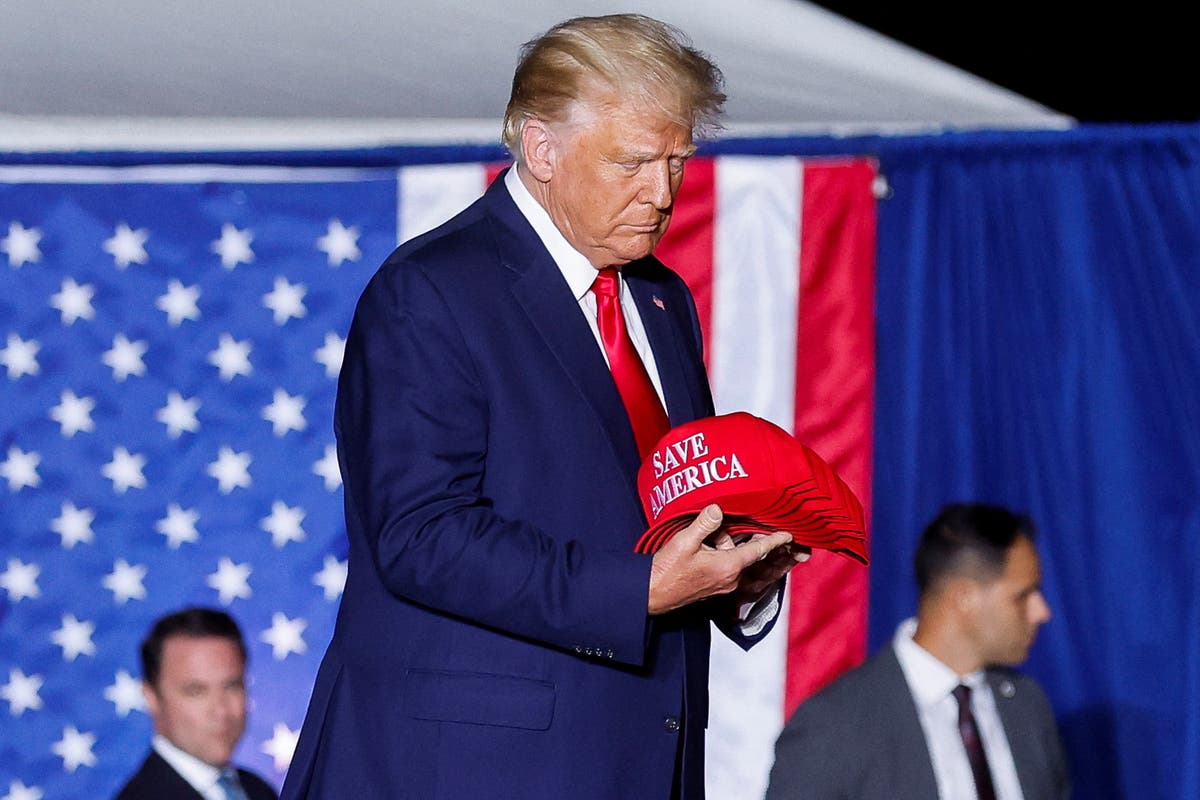 Donald Trump took the stage on Friday for his latest campaign-style rally of 2022, this time in Wilmington, North Carolina.

At the speech, he tore into New York attorney general Letitia James, who filed a $250m lawsuit against Mr Trump and his company for a host of allegedly fraudulent business practices.

Ahead of the rally, Mr Trump appeared to fall further into the world of QAnon after he reposted a video on his own Truth Social network containing images and slogans associated with the fringe conspiracy.

Scenes including a US Capitol building with lightening bolts and the words “It’s going to be biblical”, as well as the phrase “prepare for the storm”, were among the images featured along with “Q” symbols. Mr Trump has previously denied having knowledge of the conspiracy despite many of his supporters and Capitol rioters being connected to it.

In other news, Mr Trump’s attorneys have been ordered to say one way or the other whether they actually believe the FBI planted incriminating evidence in the documents seized from Mr Trump’s home – or whether the former president is merely bluffing to save face.

In classic fashion, Donald Trump is vacilitating in this rally between inflated claims about his perfect record in the White House and apocalyptic predictions that America is dying.

“For some reason, it’s just not great anymore,” Mr Trump said of America during his rally on Friday in North Carolina.

Donald Trump is continuing to call for a death penalty for drug dealers, supporting his proposal with false claims that such a policy would dramatically reduce crime.

“If you do the death penalty for drug dealers, you will cut crime by more than 80 per cent in this country, immediately,” Mr Trump told the North Carolina crowd on Friday.

As Alex Woodward and Josh Marcus reported for The Independent, not only is this not true, but it goes against Mr Trump’s own past bills on criminal justice.

Former president Donald Trump was not 10 minutes into his remarks at a rally meant to boost Republican candidates in North Carolina when he turned his attention to a candidate who will appear on a ballot 437 miles away in the state he once called home.

Instead of extolling the virtuest of the GOP ticket in this year’s midterm elections, the twice-impeached ex-president launched into an extended tirade about the New York State attorney general who on Wednesday filed a $250m lawsuit against him, his three eldest children and a host of companies, organisations and persons associated with his eponymous real estate and licensing business, following a three-year civil investigation into allegations of fraud.

“There’s no better example of the left’s chilling obsession with targeting political opponents than the baseless, abusive and depraved lawsuit against me, my family, my company, by the racist Attorney General of New York State. Leticia ‘Peekaboo’ James,” said Mr Trump, who employed a bizarre and heretofore unexplained nickname for the Empire State’s chief law enforcement officer.

Former president Donald Trump was not 10 minutes into his remarks at a rally meant to boost Republican candidates in North Carolina when he turned his attention to a candidate who will appear on a ballot 437 miles away in the state he once called home.

Donald Trump took a belated jab at Joe Biden during his speech on Friday in North Carolina.

“They want to call us domestic terrorists,” Mr Trump told the crowd. “Can you believe it? I’m not a terrorist.”

The remark was an apparent response to Mr Biden’s high-profile speech earlier this month where he described the Make America Great Again movement as a form of extremism.

“Too much of what’s happening in our country today is not normal,” Mr Biden said at a speech in Philadelphia, adding that the man he defeated nearly two years ago — former president Donald Trump — and his “Maga Republican” allies “represent an extremism that threatens the very foundations of our Republic”.

Mr Biden stressed that “not every Republican” subscribes to the “extreme ideology” of Mr Trump and his acolytes, but he warned that the GOP today is largely “dominated, driven and intimidated” by Mr Trump and “the Maga Republicans,” referring to Mr Trump’s and his “Make America Great Again” campaign slogan.

‘For a long time, we’ve reassured ourselves that American democracy is guaranteed. But it is not’

Donald Trump is sounding a little different than he has at past rallies.

Make no mistake, he’s still falsely claiming to have won the 2020 election.

“I ran twice. I won twice, getting many millions more votes,” told the crowd in North Carolina.

But he’s also encouraging GOP voters to turn out in November.

“You must vote Republican” in “overwhelming numbers,” Mr Trump told the rally.

“We have to swamp ‘em,” he continued. “The best way we can stop them from cheating—becuas they’re cheaters, dirty rotten cheaters—is to swamp them.”

Previously, during the 2020 election, he rankled top Republicans by saying voters shouldn’t bother with the tight Georgia Senate race, where a pair of Democrats won.

‘This is the smallest crowd I’ve seen at a rally of his in Georgia since he won the 2016 election,’ says journalist Greg Bluestein

Predictably, Donald Trump is hammering New York attorney general Letitia James for the massive fraud lawsuit she filed this week against the former president and the Trump Organization.

He told the crowd at a Friday rally in North Carolina the suit from “this crazy radical nutjob James” was “racist” and an “appalling and malicious abuse of power.”

“There’s never been a president that’s gone through the crap I’ve gone through,” Mr Trump complained during his speech.

The former president has taken the stage, after a lengthy wait at his Friday rally in Wilmington, North Carolina.

We’ll be following all the latest from his campaign-style speech.

Trump’s weird theory about Biden and ‘Phantom of the Opera’

Ahead of Donald Trump’s rally in North Carolina on Friday, he played a track from the musical Phantom of the Opera for the crowd.

The former president has a deep, somewhat strange attachment to the Broadway show.

He even thinks its recent closure is related to the Biden administration.

The Independent’s Eric Michael Garcia is on the ground in North Carolina for today’s Trump rally.

Right now, per Eric, the crowd is watching a Fox News clip about the Mar-a-Lago raid.

Donald Trump is a man who famously values his image.

He probably wouldn’t like the reviews of America coming out of the top levels of South Korea right now.

The president of South Korea was been caught on camera calling US lawmakers “idiots” and saying that they could possibly embarrass US President Joe Biden if they don’t approve funding for global public health initiatives.

Gustaf Kilander has the full story.

Tennis stars laud Federer ahead of retirement from tennis