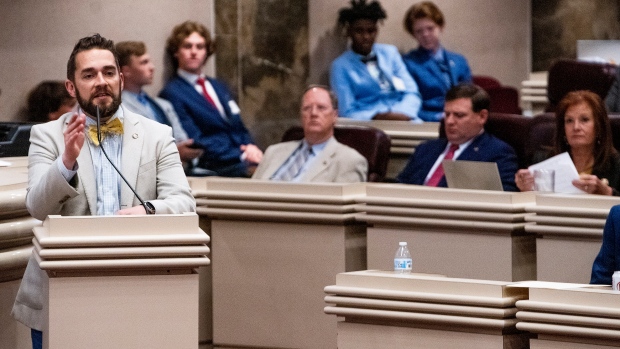 The legislation now goes to Republican Gov. Kay Ivey for her consideration as Alabama becomes the latest red state to seek legislation and policies aimed at trans young people. Ivey, who is running for reelection, has not indicated whether she will sign the measures.

The House of Representatives voted 66-28, largely along party lines, to grant final approval to legislation that would make it a felony for a doctor to prescribe puberty blockers or hormones to aid in the gender transition of anyone under age 19. Violations would be punishable by up to 10 years in prison. The bill also would prohibit gender transition surgeries, although doctors told lawmakers those are generally not done on minors.

Rep. Neil Rafferty, the only openly gay member of the Alabama Legislature, appeared to struggle to maintain composure as lawmakers headed to the vote.

Republican Rep. Wes Allen of Troy, sponsor of the House version of the bill, compared the legislation to laws that don’t allow children to drink, smoke or get tattoos until they are adults.

“It’s about protecting these minors. It’s not about adults. Their minds are not fully developed to make these decisions on these medications and surgeries,” he said.

Rep. Chris England, who serves as chairman of the Alabama Democratic Party, said the measure targets already vulnerable children and essentially tells them they are not welcome in Alabama.

“You’re saying this is about children. It’s not. What it is about is scoring political points and using those children as collateral damage,” England said.

The bill would also require school counselors, nurses and others to tell parents if a child discloses they believe they are transgender.

An Ivey spokeswoman said the governor’s office is reviewing the bill.

Jeff Walker, whose 15-year-old daughter Harleigh is transgender, said he was “infuriated” as he watched a livestream of the House vote. Walker said he wants the governor, “to know that she doesn’t have to sign this.”

“All this did today is hurt Alabama families,” Walker said.

Arkansas approved a similar law in 2021, but it was put on hold by the courts. Advocacy groups in Alabama have vowed to quickly challenge the measure if Ivey signs it into law.

In a written statement, Chase Strangio, deputy director for Trans Justice with the ACLU’s LGBTQ & HIV Project, called the Alabama measure “the most deadly, sweeping, and hostile law targeting transgender people in the country.”

White House spokeswoman Jen Psaki told reporters Thursday that the U.S. Department of Justice has warned states such laws and policies may violate the Constitution and federal law.

Senators voted 26-5 to approve legislation mandating that K-12 students can only use multiperson bathrooms and locker rooms that correspond with the gender on their original birth certificate, rather than their current gender identity. Republicans in the Senate also added language similar to a law in Florida that critics called the “Don’t Say Gay” measure.

The Alabama language would “prohibit classroom instruction or discussion on sexual orientation or gender identity” for students in kindergarten through the fifth grade. The Alabama proposal goes further than Florida’s law, which includes grades K-3.

“Kids in kindergarten through fifth grade should not be introduced to sexual orientation and gender identity, and if they are it should could come from their parents,” said Republican Rep. Scott Stadthagen of Hartselle.

Stadthagen said he introduced the bathroom bill after hearing of schools being threatened with lawsuits when they offered to let students use faculty bathrooms.

Rep. Napoleon Bracy, a Democrat from Prichard, called the sudden addition of the Florida-style language “totally political” as lawmakers head to primaries in May.

“We can’t continue to just be bullying and targeting people because of who they are,” Bracy said.