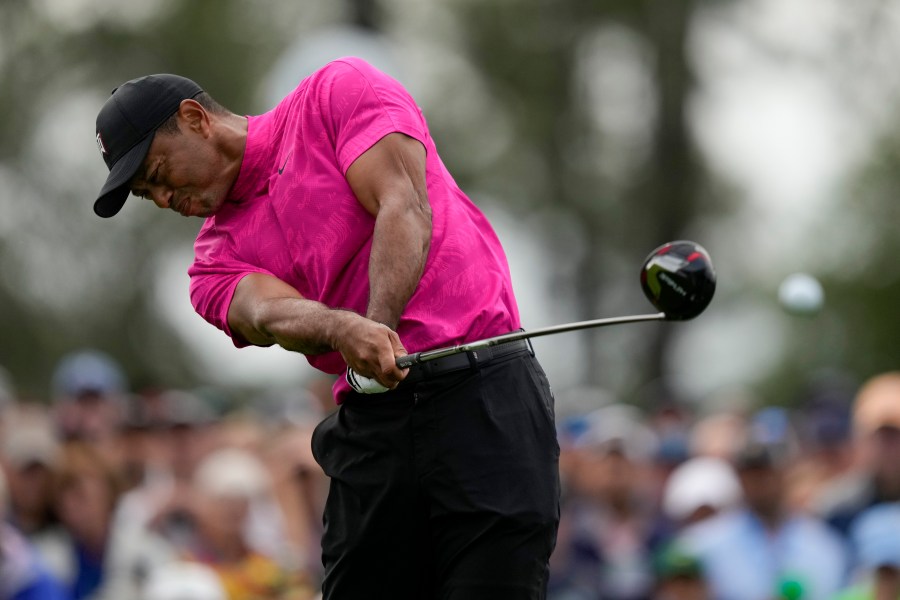 Walking with the slightest hint of a limp after a devastating car wreck that could’ve cost him his right leg, Woods sent Masters Tournament patrons into an uproar Thursday with his first birdie of the tournament.

After five straight pars — he just missed a birdie at the tough No. 5 hole when a 15-foot putt lipped out — Woods delivered a vintage tee shot at the par-3 sixth.

The ball climbed up a ridge on the green and stopped 2 feet short of the flag, leaving Woods with a tap-in to push his score to 1-under.

Woods made a sloppy bogey at the par-5 eighth, where a poor wedge shot and errant chip led to a 6. But he bounced back with a tricky downhiller from 8 feet to save par at No. 9.

Woods made the turn with an even-par 36, leaving him three strokes behind early leader Joaquin Niemann.

Yep, there was a long way to go.

Still, it felt as if Woods was already a winner.

This was his first truly competitive tournament since a car wreck in February 2021 damaged his right leg so badly doctors told him that amputation was an option.

Wearing a pink shirt and black pants, Woods was greeted by thunderous applause when his name was announced to a huge gallery surrounding the first tee.

Woods failed to make solid contact with his first shot: a 264-yard drive that faded behind a bunker on the right side of the fairway. His approach rolled off the front of the green, but he sank a 10-foot putt to save par, bringing another huge roar from spectators.

Woods walked slowly, knowing that he faced four tough days on an extremely hilly course if he manages to make the cut.

He couldn’t fully bend over to read putts, forcing him to rely more on caddie Joe LaCava to help him judge the tricky greens at Augusta National.

His career was in jeopardy after the car wreck left him confined to a hospital bed for three months. Woods was out of the public eye until last November, when he posted a video of himself swinging a club with a simple message: “Making progress.”

His lone tournament in the 508 days since he last competed was a just-for-fun event in December in which he rode in a cart and was paired with his 13-year-old son, Charlie.

Despite the long layoff and the obvious physical limitations with screws and rods still holding the bones in place in his right leg, Woods said he still thinks he can win his sixth green jacket.

At 46, he would be the oldest Masters champion, by three weeks over Jack Nicklaus.

The biggest question is how Woods holds up over 18 holes for four straight days. He walked 18 holes last week — his first big test — during a scouting trip with his son.

He teed off at 11:04 a.m. Thursday — 30 minutes behind schedule because of lingering showers — with Louis Oosthuizen and Niemann.

“I can hit it just fine. I don’t have any qualms about what I can do physically from a golf standpoint,” Woods said Tuesday. “Walking is the hard part. This is normally not an easy walk to begin with. Now given the conditions that my leg is in, it gets even more difficult.

“Seventy-two holes is a long road and it’s going to be a tough challenge,” he added. “And a challenge that I’m up for.”