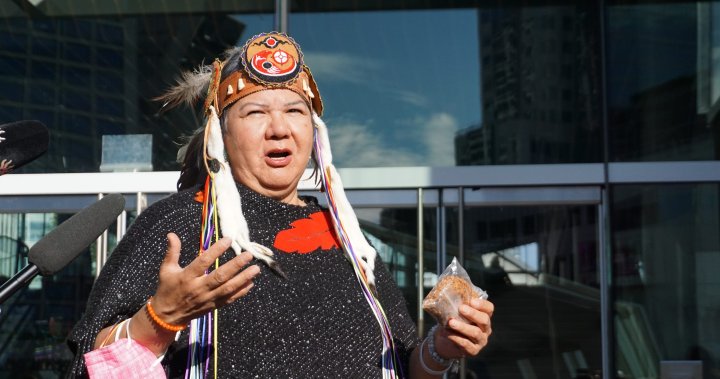 Despite some efforts to limit her participation, National Chief RoseAnne Archibald led the grand procession into the Assembly of First Nations’ annual general meeting on Tuesday.

She wore regalia and carried the eagle staff — her sacred responsibility as national chief — and was followed into the Vancouver Convention Centre ballroom by elders, veterans, chiefs and delegates.

“I’m the kind of leader who, when difficult circumstances come, I actually get stronger through it,” she told reporters before the procession.

Archibald was suspended this month by the AFN executive committee and its national board of directors pending the results of an investigation into workplace complaints from four of her staff members.

The previous day, Archibald had publicly called for a forensic audit and independent inquiry into the assembly’s alleged corruption and “toxicity.” Her allegations breached the organization’s whistleblower policy and code of conduct, and her oath of office, according to the executive committee.

Archibald has claimed the four staffers who lodged complaints against her wanted more than $1 million in payouts, which she refused to provide.

Since the controversy began mid-month, the national chief has been banned from participating in the annual general assembly, permitted to participate, taken off parts of its agenda, and then put back on.

Before the grand procession on Tuesday, a small rally was held outside the Vancouver Convention Centre to support her and condemn what she has described as efforts to “silence” her.

Donna Cole of the Squamish Nation drummed with the group, and having regularly attended the AFN meeting in the past, said the assembly executive’s “deflection tactics” don’t surprise her.

“We saw firsthand, witnessed the misogyny, the coverups, the lack of transparency, and now that we have our first female national chief, it’s feeling a lot more personal,” she told Global News.

“So we can’t let her go through this on her own, she needs support, we need to stand with her.”

At that rally, Archibald repeated her concerns, citing corruption, financial irregularities at the AFN, and a culture of “backroom deals.” She urged the chiefs and proxies attending the general assembly — more than 440 altogether — to “take back” the week’s meetings from the executive.

Asked about the controversy, Northwest Territories AFN Regional Chief Gerald Antoine said it’s important that everything be “put on the table” at the annual general assembly.

“We all need to give ourselves time and space to share — not only that but to look at what the racket is and look at how we can come together, understand the situation, and frame steps forward,” he told Global News.

He stopped short of supporting Archibald’s calls for a financial audit, stating it’s important to look at “assessing what we are doing.”

“I think this is a family gathering and a time to talk to each other in a good way.”

More than 2,400 delegates have registered for the annual general assembly, which runs from July 5 to July 7 under the banner, “Walking the Healing Path.”

In opening remarks on Tuesday, speakers — including Archibald — focused on that message.

“I’m standing here today to welcome you and let you know that I love and care for each one of you in this room,” she said. “This meeting is a historical meeting. I know that we will be able to walk through this in a good way together.”

Squamish Nation Coun. Khelsilem, who welcomed participants to the territory, thanked Archibald and others for taking time out of their daily lives to work for future generations.

Archibald is expected to speak again before delegates on Tuesday.

Denial of responsibility! Secular Times is an automatic aggregator of the all world’s media. In each content, the hyperlink to the primary source is specified. All trademarks belong to their rightful owners, all materials to their authors. If you are the owner of the content and do not want us to publish your materials, please contact us by email – seculartimes.com. The content will be deleted within 24 hours.
AFNAFN AGAAFN annual general assemblyAssembly of First NationsBC First NationsCanadaFirst NationsNational Chief RoseAnne Archibald
0
Share FacebookTwitterGoogle+ReddItWhatsAppPinterestEmail

Why it is so hard for humans to have a baby?