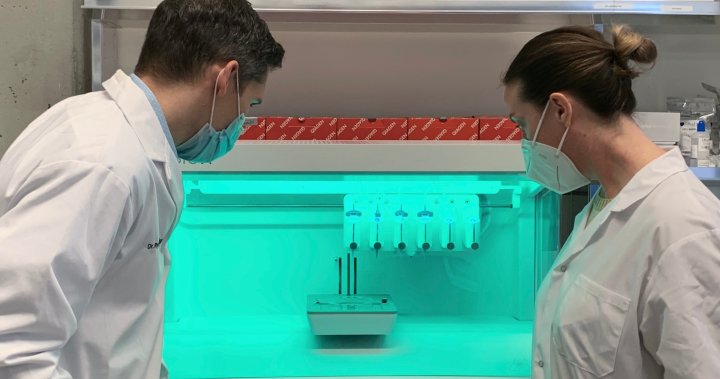 Inside a lab at the University of British Columbia, the printers aren’t for paper. Instead, they are being used in hopes of producing something unexpected — sperm.

In a pair of world-firsts, the team of researchers, led by Flannigan, used a 3D printer to create viable testicular cells and identified early signs of sperm-producing capabilities.

In Canada, about one in six couples experience infertility. Thirty per cent of the time, the inability to conceive is related to the male partner and in some cases, it’s not treatable.

The most severe form of male infertility is called non-obstructive azoospermia or NOA.

“It is a production problem in the testicle, where there is no sperm that is coming out into the ejaculate,” explained Dr. Jesse Ory, assistant professor of urology at Dalhousie University. “Men often won’t know because the volume in their ejaculate is often normal. But when you do a semen test, you don’t see any sperm in the ejaculate fluid.”

Toronto urologist Dr. Kirk Lo said NOA can be “congenital” or genetic but more common causes are chromosomal issues, trauma and toxic exposure (such as chemotherapy or radiation). Sometimes, the causes of testicular failure are unknown.

There are treatments but Lo said they can be invasive and ineffective.

“We can attempt something called microscopic testicular sperm extraction,” explained Lo, “We open up the testes under a microscope and look for areas where we could potentially find sperm. It’s really a last resort for these patients … the success at best is 50 per cent.”

It’s the patients Flannigan couldn’t help, he said, who were the motivation for the project.

“It’s really disappointing for myself and for the couples and patients when we don’t have any options.”

For the study, Flannigan and his team collected stem cells from a biopsy on the testicles of a patient living with NOA.

The cells were then cultured.

When they continued to show positive viability, they were 3D printed onto a petri dish into a hollow tubular structure that resembles the sperm-producing seminiferous tubules.

Twelve days later, the cells had not only survived but thrived.

“We got to the middle stage of sperm production,” Flannigan explained.

Dr. Amin Herati, a urologist at Johns Hopkins Hospital told Global News the research is a “game-changer” for men living with NOA.

“When you take that hope away from patients, where they can’t have kids and tell them there is no option and then you bring forward an option such as what Dr. Flannigan is proposing, that could make a huge difference in the world of fertility,” said Herati.

Flannigan said there are still several years of research ahead and testing to do before his work is put into clinical practice.

“This is really the starting point for our research,” he said.

Now, the goal is to “coach” the printed cells into producing sperm. The group will do this by exposing cells to different nutrients and growth factors, as well as perfecting the structural arrangement.

If successful, the sperm could be used to fertilize an egg through in vitro or IVF, giving more men the chance at becoming biological fathers.

“Being able to have a family is something that’s pretty important,” said Ory. “The more technology that we get that can allow us to do that, you know, I’m all for it.”

Men have a biological clock, too. Here’s when their fertility declines

“The whole idea is you could potentially use these kinds of test models to understand the underlying pathology which may help you target treatments,” said University of Toronto urology professor Dr. Keith Jarvi.

“If you have an understanding of why these men have a production problem, you could also potentially avoid it in the future.”

Denial of responsibility! Web Times is an automatic aggregator of the all world’s media. In each content, the hyperlink to the primary source is specified. All trademarks belong to their rightful owners, all materials to their authors. If you are the owner of the content and do not want us to publish your materials, please contact us by email – webtimes.uk. The content will be deleted within 24 hours.
3D printing3D printing sperm cells3D printing sperm cells UBC research3D printing sperms3D printing testicular cellsCanadaHealthinfertility treatment
0
Share FacebookTwitterGoogle+ReddItWhatsAppPinterestEmail

I’m a U.S. Citizen. Where in the World Can I Travel to Right Now?