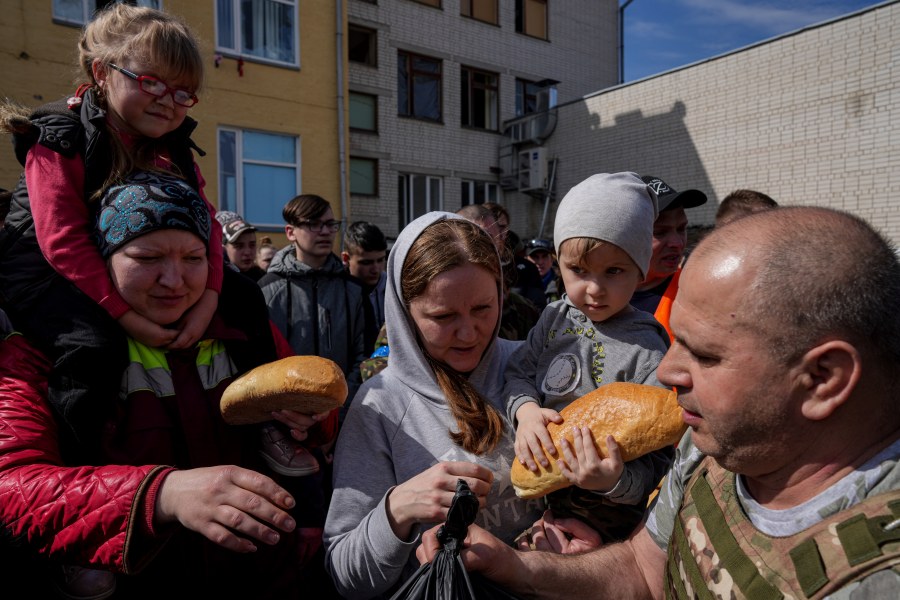 Dozens of people lined up to receive bread, diapers and medicine from vans parked outside a shattered school now serving as an aid-distribution point in Chernihiv, which Russian forces besieged for weeks as part of their attempt to sweep south towards the capital before retreating.

The city’s streets are lined with shelled homes and apartment buildings with missing roofs or walls. A chalk message on the blackboard in one classroom still reads: “Wednesday the 23rd of February — class work.”

Russia invaded the next day, launching a war that has forced more than 4 million Ukrainians to flee the country, displaced millions more within it and sent shock waves through Europe and beyond.

Ukrainian Foreign Minister Dmytro Kuleba warned Thursday that despite a recent Russian pullback, the country remains vulnerable, and he pleaded for weapons from NATO to face down the coming offensive in the east. Nations from the alliance agreed to increase their supply of arms, spurred on by reports that Russian forces committed atrocities in areas surrounding the capital.

Western allies also ramped up financial penalties aimed at Moscow, including a ban by the European Union on Russian coal imports and a U.S. move to suspend normal trade relations with Russia.

Kuleba encouraged Western countries to continue bearing down on Russia, suggesting that any letup will result in more suffering for Ukrainians.

“How many Buchas have to take place for you to impose sanctions?” Kuleba asked reporters, referring to a town near Kyiv where Associated Press journalists counted dozens of bodies, some burned, others apparently shot at close range or with their hands bound. “How many children, women, men, have to die — innocent lives have to be lost — for you to understand that you cannot allow sanctions fatigue, as we cannot allow fighting fatigue?”

Ukrainian officials said earlier this week that the bodies of 410 civilians were found in towns around the capital city. Volunteers have spent days collecting the corpses, and more were picked up Thursday in Bucha.

Bucha Mayor Anatoliy Fedoruk said investigators have found at least three sites of mass shootings of civilians during the Russian occupation. Most victims died from gunshots, not from shelling, he said, and corpses with their hands tied were “dumped like firewood” into recently discovered mass graves, including one at a children’s camp.

The mayor said the count of dead civilians stood at 320 as of Wednesday, but he expected the number to rise as more bodies are found in his city, which once had a population of 50,000. Only 3,700 now remain, he said.

In his nightly address, Ukrainian President Volodymyr Zelenskyy suggested that the horrors of Bucha could just be the beginning. In the northern city of Borodianka, just 30 kilometers northwest of Bucha, Zelenskyy warned of even more casualties, saying “there it is much scarier.”

The world should brace itself, he said, for what might soon be found in the seaport city of Mariupol, saying that on “on every street is what the world saw in Bucha and other towns in the Kyiv region after the departure of the Russian troops. The same cruelty. The same terrible crimes.”

He pledged that an international war crimes investigation already underway will identify “each of the executioners” and “all those who committed rape or looting.”

Ukrainian and several Western leaders have blamed the massacres on Moscow’s troops, and the weekly Der Spiegel reported Thursday that Germany’s foreign intelligence agency had intercepted radio messages between Russian soldiers discussing the killings of civilians. Russia has falsely claimed that the scenes in Bucha were staged.

Kuleba became emotional while referring to the horrors in the town, telling reporters that they couldn’t understand “how it feels after seeing pictures from Bucha, talking to people who escaped, knowing that the person you know was raped four days in a row.”

His comments came in response to a reporter’s question about a video allegedly showing Ukrainian soldiers shooting a captured and wounded Russian soldier. He said he had not seen the video and that it would be investigated. He acknowledged that there could be “isolated incidents” of violations.

The footage has not been independently verified by the AP.

In the six-week-old war, Russian forces failed to take Ukraine’s capital quickly, denying what Western countries said was Russian leader Vladimir Putin’s initial aim of ousting the Ukrainian government. In the wake of that setback and heavy losses, Russia shifted its focus to the Donbas, a mostly Russian-speaking, industrial region in eastern Ukraine where Moscow-backed rebels have been fighting Ukrainian forces for eight years.

The United Nations’ humanitarian chief told the AP on Thursday that he’s “not optimistic” about securing a cease-fire after meeting with officials in Kyiv and in Moscow this week, underlining the lack of trust the two sides have for one another. He spoke hours after Russian Foreign Minister Sergey Lavrov accused Ukraine of backtracking on proposals it had made over Crimea and Ukraine’s military status.

It’s not clear how long it will take withdrawing Russian forces to redeploy, and Ukrainian officials have urged people in the country’s east to leave before the fighting intensifies there.

Even as Ukraine braced for a new phase of the war, Russia’s withdrawal brought some relief to Chernihiv, which lies near Ukraine’s northern border with Belarus and was cut off for weeks.

Vladimir Tarasovets described nights during the siege when he watched the city on fire and listened to the sound of shelling.

“It was very hard, very hard. Every evening, there were fires, it was scary to look at the city. In the evening, when it was dark, there was no light, no water, no gas, no amenities at all,” he said. “How did we go through it? I have no words to describe how we managed.”

In addition to spurring NATO countries to send more arms, the revelations about possible war crimes led Western nations to step up sanctions, and the Group of Seven major world powers warned that they will continue strengthening the measures until Russian troops leave Ukraine.

The U.S. Congress voted Thursday to suspend normal trade relations with Russia and ban the importation of its oil, while the European Union approved punishing new steps, including the embargo on coal imports. The U.N. General Assembly, meanwhile, voted to suspend Russia from the world organization’s leading human rights body.

U.S. President Joe Biden said the U.N. vote demonstrated how “Putin’s war has made Russia an international pariah.” He called the images coming from Bucha “horrifying.”

“The signs of people being raped, tortured, executed — in some cases having their bodies desecrated — are an outrage to our common humanity,” Biden said.

The U.S. State Department said it was blacklisting the United Shipbuilding Corp., Russia’s largest military shipbuilder, as well as its subsidiaries and board members. The move blocks their access to American financial systems. The department also said it would levy sanctions against the world’s largest diamond mining company, Russia-backed Alrosa.

Democrats accuse oil companies of 'rip off' on gas prices