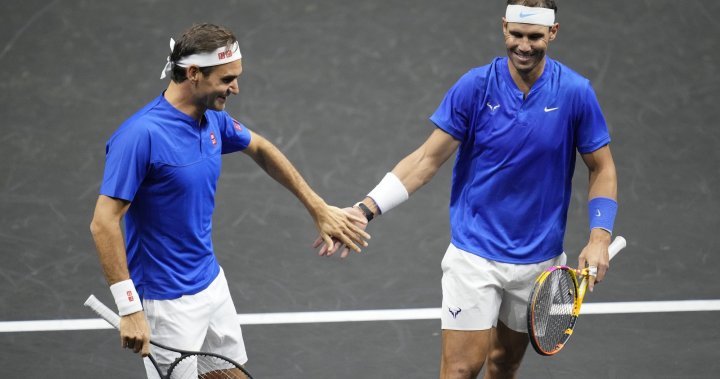 It was surely unthinkable that Roger Federer’s trophy-laden career would end with a defeat but that is what transpired as the 41-year-old Swiss maestro lost alongside Rafa Nadal on an emotional night at the Laver Cup on Friday.

In front of a 17,500 sell-out crowd at London’s O2 Arena, 20-time Grand Slam champion Federer returned from more than a year away for a last dance in tandem with his great rival on a gripping and memorable finale by the Thames.

With the clock already well past midnight, Federer had the chance to seal victory in the doubles clash when he served at match point in a tense deciding tiebreak but it was not to be as Americans Jack Sock and Frances Tiafoe ruined the script.

Sock thumped a forehand winner to seal a 4-6 7-6 11-9 win for Team World. After a brief moment of almost silence around the packed arena, the crowd erupted to salute an emotional Federer.

The London crowd had to wait for the arrival of Federer and Nadal as British favourite Andy Murray and Alex De Minaur engaged in a series of interminable rallies in a grinding opening match of the night, eventually won by De Minaur.

Murray’s two Wimbledon titles mean he is a national sporting icon but the night was all about Federer — a player who resides in the pantheon of sporting greats along with the likes of Pele, Tiger Woods, Michael Jordan and Muhammad Ali.

Even Federer’s practice sessions at the O2 were standing room only affairs and an electric atmosphere greeted him as he walked out into the cavernous arena alongside Nadal just after 10pm local time for what would be his last dance.

“I’ve done this thousands of times, but this one feels different. Thank you to everybody who’s coming tonight,” Federer has posted on Twitter earlier in the day.

I’ve done this thousands of times, but this one feels different. Thank you to everybody who’s coming tonight. pic.twitter.com/lmPWTNzjbn

It certainly felt that way too for everyone present in a crowd which included Australian great Laver — the man who inspired Federer to create the novel team event.

After the coin toss formalities loud roars accompanied Federer and Nadal, otherwise knows as ‘Fedal’, as they warmed up to the sound of The Clash’s London Calling booming around the venue — Federer raising his arm in salute after his introduction.

An even bigger cheer went up when Federer punched away a volley in the opening game — his first competitive shot since a demoralising defeat by Hubert Hurkacz in the Wimbledon quarter-finals in 2021 when he lost the last set 6-0.

During the changeovers the video screens showed some iconic moments of Federer’s 24-year professional career with tributes from Nadal and his mother Lynette.

American duo Sock and Tiafoe, pantomime villains for the night, tested Federer’s reactions with some lusty blows aimed at the Swiss maestro who would have demanded nothing less.

Federer was equal to pretty much everything though, his silky shot-making and nimble footwork very much intact despite such a long time away from the match court.

The pair with a combined age of 77 and 42 Grand Slam titles between them edged the opening set by breaking Tiafoe’s serve.

Despite the party atmosphere in the stadium, there was no danger of Federer’s farewell match turning into an exhibition.

It was serious business and after they fell a break down early in the second, Federer and Nadal stormed back and looked poised for a straight sets win but were instead dragged into a tense deciding tiebreak with the clock past midnight.

Chants of ‘Let’s Go Roger Let’s Go’ resounded around the packed stands as Federer and Nadal clawed their way towards a victory the occasion demanded but they fell agonisingly short.

Denial of responsibility! Secular Times is an automatic aggregator of the all world’s media. In each content, the hyperlink to the primary source is specified. All trademarks belong to their rightful owners, all materials to their authors. If you are the owner of the content and do not want us to publish your materials, please contact us by email – seculartimes.com. The content will be deleted within 24 hours.
2022 laver cupFedererfederer retirementfederer retireslaver cupLaver Cup 2022Pro tennisRafael Nadal
0
Share FacebookTwitterGoogle+ReddItWhatsAppPinterestEmail