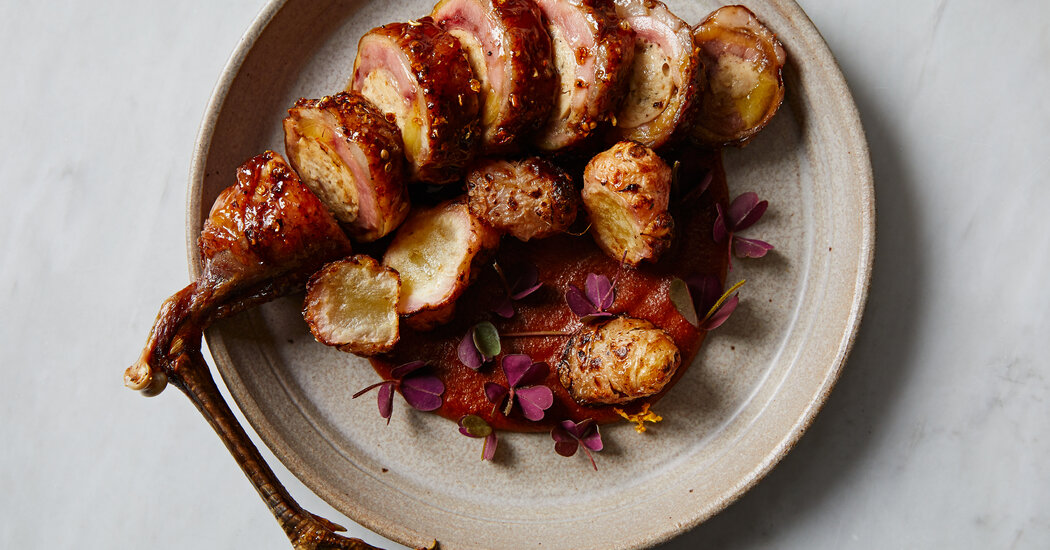 Not every great chef cooks in a great restaurant. Some never do.

Until she opened Mena in January, Victoria Blamey was probably New York City’s leading example of a chef who was better than the restaurants that hired her. With Mena, she finally has a great restaurant. Because she’s an owner and because she doesn’t have to tailor her cooking to anybody’s preconceived notions, as she did in her last two jobs, she is making food that’s truly her own — it doesn’t look or taste like anything else in the city.

Ms. Blamey made her reputation at Chumley’s, a reconstructed speakeasy whose dining room was decorated with jackets of books by long-dead Greenwich Village writers; to anyone who ate there, it was obvious that Ms. Blamey’s cooking was more interesting than many of those books; even her cheeseburger was probably the most soigné cheeseburger in the city.

Her next job, at Gotham Bar and Grill, was probably doomed from the start. She went there to replace Alfred Portale, who had been the chef for more than 30 years — with great success and acclaim for most of them, although the returns had been diminishing for some time when Ms. Blamey arrived. The regulars, a fiercely loyal but shrinking group, clung to his menu like a life raft, and rebelled when Ms. Blamey retired it. At the same time, some younger diners, drawn in by her reputation, were mystified by the formal service rituals and the Reagan-era interior design. During her 10 months there, eating at Gotham was like going to a wedding where the bride’s family and the groom’s family aren’t speaking.

At Mena, in TriBeCa, she has the blank slate she needs. That doesn’t mean she’s starting from nothing. Several dishes are reworkings of earlier ideas, like the bowl of lentils under mushroom chips. Gilded with chicken fat, this made an intense topping for braised rabbit at Gotham. Now it is on its own. The lentils taste distinctly of shiitakes and tomatoes, and more distantly of golden duck-skin crackling.

So many paper-thin slices of fried king trumpet mushrooms are piled up on top that at first it looks as if they’re the only thing in the bowl. A whole bowl of Mena’s mushroom chips is something to wish for when you lay your head on the pillow at night. Seasoned lightly with vadouvan, they create flavors that linger. This is one of Ms. Blamey’s skills, provoking tastes that play on the palate longer than you expect.

There’s that classic dream about discovering that an apartment has a spare room nobody has ever noticed; Ms. Blamey finds new rooms within classic dishes. She enlarges them.

Another high point at Gotham was the scallop ceviche in a leche de tigre made from fresh corn. Ms. Blamey picks up the idea at Mena and expands on it, with fermented winter squash in place of the corn. She loses the summery sweetness of corn, but the squash broth has greater depth and a longer, more complex finish, which is amplified by shrimp paste. The scallops, cold and ivory white, are rolled in a kind of dust of pickled chiles and seaweed flakes. The flavors move out, radiate and converge.

Ms. Blamey’s upbringing in Santiago, Chile, which informed a few dishes at her earlier restaurants, is more central to Mena’s menu. Steamed Maine mussels are folded under charred Murdoc cabbage in a dark reduction made from caramelized onions and more mussels, this batch dehydrated in homage to a traditional Chilean technique. The dish shows how good Ms. Blamey can be when she starts with underestimated ingredients like cabbages and onion and decides to shoot the works.

Locro, a stew of mostly pre-Columbian vegetables that appears in almost endless permutations up and down the Andes, is prepared at Mena in a form both rustic and luxurious at the same time. The stew is rich with potatoes, quinoa and lumps of snow crab; tiny white peas from the Carolina Sea Islands, almost impossibly creamy, give it a substantial weight.

But there are also dishes that seem to have nothing to do with Chile — for instance, a chou farci. It is not the usual steaming bundle of cabbage and meat but a sort of circular napoleon made by sandwiching leaves of cabbage and other greens between layers of stunningly flavorful, lime-scented scallop mousse that has attained the feathery solidity of panna cotta. Ringed by a froth of vin jaune sauce, it plays like a lost classic of nouvelle cuisine.

Early in her career, Ms. Blamey made a point of working for chefs who were devoted to technical innovation, including Wylie Dufresne, Paul Liebrandt and Matthew Lightner. But she isn’t infatuated with technique for its own sake, and she seems to know the value of low-tech home cooking.

In fact, she has a rare ability to bring the two together. She seasons a soft, savory blood sausage with onions and spices, surrounds it with potato purée and finishes it with a creamy au poivre sauce. The flavors may suggest a lace-curtain bistro in Lyon, but the ethereal lightness of the potatoes says Mena, and only Mena.

To get to Mena, you head below Canal Street and look for Cortlandt Alley. You’ll probably know it when you see it because it’s been in almost every movie that needed a backdrop of old, gritty, dangerous New York.

Inside, the restaurant has some disco-era curves and some Central European coffeehouse elegance, and many square yards of windows. A lot of the seating is at midnight-blue banquettes and booths. Framed photographs on one wall show the remains of a house from which whole sections have been removed. It is the work of Gordon Matta-Clark, the Chilean American artist who altered buildings with chain saws, at some risk to their structural integrity and his own safety.

The room is energetic and comfortable enough that you may want to sit for hours. But not forever — the fixed-price menu is meant to be a meal, not a marathon. For $125 you get three savory dishes and dessert. Over my three meals, the menu offered several options for every course except the last; dessert was always a Pavlova with white slabs of meringue stacked, like the terraces of Fallingwater, over passion-fruit pulp, citrus curd — key lime, Meyer lemon, whatever was in season that week — and angel-hair squash cooked in sugar syrup.

Not having a choice of dessert struck me as a minor weakness until I recalled how many tasting menus I’ve eaten recently that cost around $125, or more, with virtually no options at any point and far fewer discoveries and adventures along the way.

That last point is where Mena overshadows so many other expensive restaurants that have opened in the city over the past few years. A safe conservatism has crept into high-end dining in Manhattan recently. Caviar will appear in the first course, truffles will be wheeled out, either sea urchin or lobster is almost guaranteed. Ms. Blamey’s ingredients make an impression not because of their associations with luxury but because she knows how to use them, from the sweet and chewy muscles of the Atlantic surf clam to the dense, sweet-sour flesh of roasted Andean oca.

Mena is here to remind us, and not a minute too soon, that when you charge that kind of money for dinner in New York City, originality is supposed to be part of the deal.

Cardi B deletes Twitter after Grammys feud with fans: ‘I HATE YOU’

Meet DALL-E, the A.I. That Draws Anything at Your Command