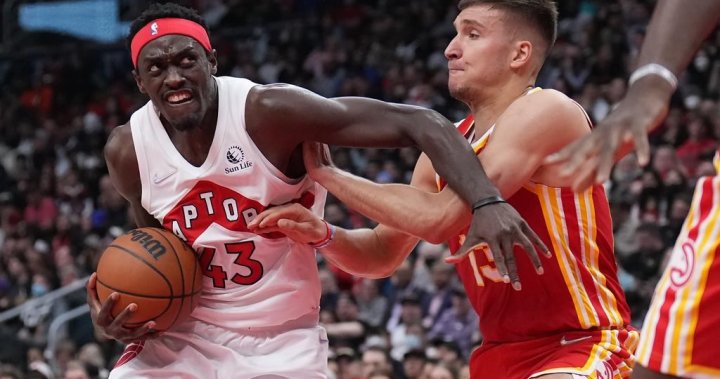 TORONTO – Nick Nurse said he had an idea at the beginning of the season how he wanted the Toronto Raptors to play. But whether they could pull it off remained to be seen.

The Raptors clinched a playoff spot with a 118-108 victory over the Atlanta Hawks on Tuesday, and Nurse praised his team for how far they’d come.

“I think they’ve formed some kind of identity, it’s a little quirky and a little different but it’s a hard-playing, competitive identity and they found a way to grind out enough wins to get ’em in this situation,” the Raptors coach said.

Fred VanVleet had 12 points, while Precious Achiuwa chipped in 11.

“It means a lot . . . it’s one of those things where you appreciate the journey,” said VanVleet, who had a rough 4-for-21 shooting night, but hit a key three-pointer with about a minute to play and the game still in doubt.

Trae Young had 26 points to lead the Hawks (41-38), who saw their five-game winning streak come to an end.

With their victory and the Cleveland Cavaliers’ 120-115 loss in Orlando, the Raptors can finish no worse than sixth in the Eastern Conference. Chicago’s loss to Milwaukee later Tuesday saw the Raptors move into fifth, a game ahead of the Bulls. With the East so tightly packed, the Raptors might not know their post-season opponent until the final games are played on Sunday.

Avoiding the play-in tournament was key, Nurse said, both for the extra six days off between games, and what the experience of a post-season series would mean to his young team.

“My goal, or our goal, always for me, was to make sure we got into a series,” he said. “I just think it’s super-important for our group to experience that, the intensity, the adjustments, the spotlight . . . for all those games is something you’ve got to go through.”

The Raptors will host playoff games at Scotiabank Arena for the first time since the thrilling 2019 NBA championship run.

The 2020 season ended in the Disneyworld bubble due to the COVID-19 pandemic, and the Raptors were exiled to Tampa, Fla., for the following season due to Canada-US border restrictions, and health and safety rules in Ontario. They didn’t make the 2021 playoffs anyways, tumbling down the Eastern Conference amid a COVID-19 outbreak in March that decimated the team to finish 12th.

“You kind of get a little jaded, a little spoiled with expecting to win,” VanVleet said. “That was taken away from us last year. Being here in this position is good.

Neither team dominated through the first three quarters of Tuesday’s see-saw battle. After briefly leading by seven points in the first half, Boucher’s three-pointer with 2:28 left in the third gave the Raptors a nine-point cushion, their biggest lead to that point. They took an 89-83 advantage into the fourth.

Boucher connected on back-to-back threes to start the fourth quarter for a 10-point lead — the first time either team had been up by double digits. But the Raptors went stone cold. Young followed up his three-pointer with a layup to cap a 10-0 Hawks run that tied the game at 102-102 with 4:29 to play.

Barnes scored on a putback, and VanVleet connected from long distance — just his second three on a horrible 2-for-12 three-point shooting night — and Toronto was back up by five with 1:03 to play, bringing the capacity crowd of 19,800 to its feet. Barnes laid it in with 22 seconds to play, running back down the court with a hand raised in victory.

Bogdan Bogdanovic drained a three-pointer but it was too little too late for the Hawks, who were relegated to the play-in tournament with the loss.

The Raptors were missing starter OG Anunoby for the second straight game with a thigh contusion.

The Raptors were coming off a 114-109 loss to Kyle Lowry and the Miami Heat that snapped their five-game win streak.

Neither team led by more than seven points through the first half. Toronto was briefly up by five in the first quarter, but Young’s jumper capped a Hawks’ 11-0 run to put Atlanta up by six. The Hawks led 31-27 to start the second.

Achiuwa drove to the hoop for a huge dunk that brought the Raptors players off the bench and put them up by six points. Siakam’s stepback shot with 9.7 seconds left in the half sent Toronto into the break with a 56-52 lead.

The Raptors host the Philadelphia 76ers on Thursday in what could be a playoff preview, and then Houston on Friday. They end the regular season on Sunday against the Knicks in New York.

This report by The Canadian Press was first published April 5, 2022.

Denial of responsibility! Web Times is an automatic aggregator of the all world’s media. In each content, the hyperlink to the primary source is specified. All trademarks belong to their rightful owners, all materials to their authors. If you are the owner of the content and do not want us to publish your materials, please contact us by email – webtimes.uk. The content will be deleted within 24 hours.
BasketballNational Basketball AssociationNBASportsToronto Raptors
0
Share FacebookTwitterGoogle+ReddItWhatsAppPinterestEmail

16 Best Breakfast in Austin Spots, According to Our Team

UK has detected a new Covid variant. Here’s what we know so far about omicron XE