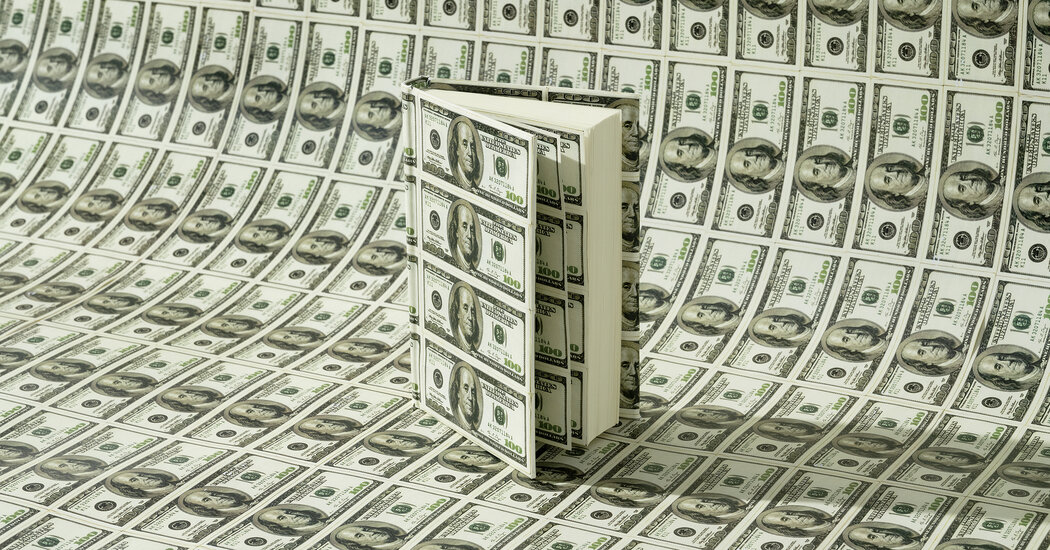 The origins of “Fifty Shades of Grey” are perhaps more widely known than those of BP Capital or Koch Industries. “Fifty Shades” sprang from the mind of Erika Mitchell, an English television executive who in 2009 wrote a fan-fiction riff on Stephenie Meyer’s “Twilight” vampire-romance series under the name Snowqueens Icedragon. When the work picked up readers, Mitchell rewrote it, removing any references to Meyer’s material but keeping its spirit, and sold the resulting work to an Australian publisher as “Fifty Shades of Grey,” by E.L. James, in 2011. The small-press book became a sensation that resulted in a seven-figure deal, one that transferred the rights from the original press to Vintage Books, a division of Knopf Doubleday, a division of Penguin Random House. It’s the kind of deal that could form a chapter in one of the billionaire memoirs, a complex transfer of capital that spawned a billion-dollar book-and-movie franchise, even before estimating the cash value of the many books that have sprouted like mushrooms in its shadow.

“Poor [expletive]-up, kinky, philanthropic Christian,” the narrator of “Fifty Shades,” Anastasia Steele, muses about her billionaire, the eponymous Christian Grey. Steele is a graduating college senior and virgin who meets the 27-year-old “telecommunications” billionaire when she interviews him for the school paper. Grey has a large and mostly unexplained business empire that leaves him plenty of time to pursue his interest in sadomasochism, dominance and control — pursuits, we are told, that stem from a tortured childhood with a “crack-whore” mother and teenage sexual abuse by a much older woman. When he is not courting Steele or pressuring her to join him in his sex dungeon as a submissive, he is issuing gruff instructions about “Darfur” on the phone. In this setup, Grey is Ragged Dick reincarnated, the orphan made good, paying it forward to “Darfur” but also playing fairy goddaddy and letting Steele, another waif, step into her own power as the mistress of an astronomically rich man. The levels have levels.

If “Pretty Woman” was a Cinderella story for the “American Pyscho” era of corporate raiding, its hero wearing his aggression on his sleeve, “Fifty Shades” is one for the “Dark Money” era. James presents Grey’s frustrating silences and elliptical back story, his penchant for surveillance, as part of his allure. The fact that the effort is so wildly successful reveals the way that Alger’s DNA persists in chaotic bastardizations and reimaginings; “Fifty Shades” has all the potency of luxury and comfort but flirts also with the allure of submission, the dark side of the Alger oeuvre’s suppressed and troubled eroticism made palatable, mainstreamed.

Grey is controlling in and outside his dungeon. He finds out where Steele is by tracking her cellphone. He buys her a laptop that she uses only to email him. “I want you to behave in a particular way,” he tells her, “and if you don’t, I shall punish you, and you will learn to behave the way I desire.” Steele demurs. “I am not a merger. I am not an acquisition,” she thinks, before she is merged and acquired. And yet, while Grey does get Steele into his dungeon, ultimately the series is about his slow domestication — her ultimate rejection of his style of sexual dominance. Hailed as a filthy exploration of bondage, the S.&M. element is in fact subverted at every juncture for a marriage plot and what Grey calls “vanilla” sex.

“Fifty Shades” has played an outsize role in the destructive, hypercapitalist consolidation of Amazon’s algorithm-based book business. Digital and physical shelves teem with additions to the house that James and Meyer built. Many are in explicit conversation with “Fifty Shades.” In “Bared to You,” where the billionaire is again a bad boy with a traumatic past and a heart of gold, the author Sylvia Day thanks E.L. James in her acknowledgments. And there are thousands of these books. Searching “billionaire romance” on Amazon Books yields more than 50,000 results with series like “Billionaire Bad Boys,” “Blue-Collar Billionaire$,” “Billionaire’s Captive,” “Boston’s Billionaire Bachelors.” In fact, the only kind of book for which “billionaire” is an explicit category is the romance novel, where it has developed into its own distinct subgenre.

Ultimately, these books are rehabilitory projects for billionaires, laundering their exploitative politics and recasting them as mildly edgy sex — not to mention putting hot young faces on a class of men that is in reality mostly approaching or past retirement age, for an audience of women who often have far less economic power. In “Everything and Less: The Novel in the Age of Amazon,” the literary scholar Mark McGurl writes of Grey: “While it is tempting to read him as little more than a poster boy for neoliberal capitalism, for that set of brutalities, he is also the symbolic vehicle by which that system is ‘softened’ and made caring again in the little welfare state of a loving marriage.” Billionaires already lived rent-free in our heads; these books simply extend the lease, adding ever weirder terms, continuing to disappear everyone who falls outside the beautiful capitalist trajectory of up, up, upward to domestic comfort. After all, Grey’s “ultimate goal is to help eradicate hunger and poverty across the globe.”