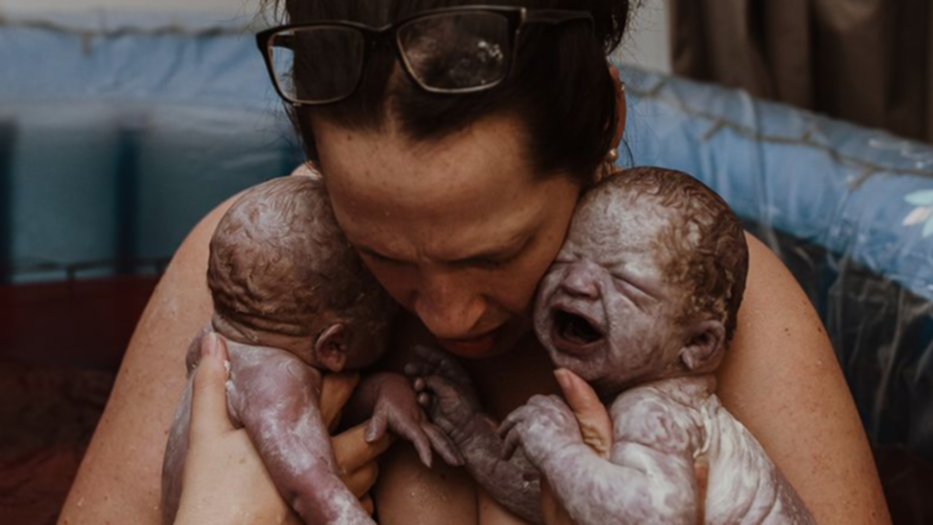 Bringing a child into the world is supposed to be a time of love, happiness and joy.

But Queensland mother Alison Collins says she was left suffering trauma after the birth of her second child.

Watch Queensland mum Alison’s ‘wild pregnancy’ in the video above

For more Parenting related news and videos check out Parenting >>

So when she was expecting for a third time, Alison knew she wanted a ‘wild pregnancy’ – free from medical prenatal care including regular scans and tests.

She also hoped for a ‘freebirth’, where the baby is delivered away from harsh hospital lights and potential medical intervention.

Following her desire to ‘feel her own way’ through her third pregnancy, Alison had a home birth at 34 weeks – delivering not one but two healthy babies.

And, even without the usual scans, she was not the least surprised that she had been carrying twins.

“Without doctors telling me what I should be feeling, I spent time understanding my body,” Alison tells 7Life.

“I was so in tune with my pregnancy that I knew there were two in there.”

Alison doesn’t describe herself as a hippy and is sharing her story so all women know they have a choice with their path to childbirth.

“Women need to know there are options, it is your body,” she says.

After the traumatic hospital birth of her second child, Ezra, Alison wanted to have baby number three at home.

With the support of her husband Erik, the family began preparing for the new arrival – without traditional medical prenatal care.

“I still took vitamins and nutrients from my naturopath,” she explains, adding she also saw her GP for advice.

But she opted out of other standard procedures, including ultrasounds and routine monitoring.

“If I needed any medical help of course I would go to my doctor,” Alison reiterates.

She sought medical attention only once, for fluid replacement due to severe morning sickness and vomiting.

While Alison was in hospital for the IV fluid treatment, a nurse raised the possibility of a multiple birth.

“My husband had actually joked about twins prior,” Alison says, pointing out that ‘doubles’ ran in both families.

But having rejected the idea of scans, the parents had no way to confirm the nurse’s opinion.

At 26 weeks, Alison came to the conclusion she would be having two babies.

“Something just felt different about this pregnancy,” she says.

“I was feeling kicks in my pelvis and in my ribs – I knew one baby couldn’t be that big.”

Every day the mum would spend time ‘tuning in’ to her pregnancy – feeling her stomach and focusing on the movements inside her.

“At one point I could feel two spines so it was pretty obvious,” she laughs.

“I felt so connected and in tune with my own body.”

Drawing on her own experience, alongside research she had done through books, online and speaking to other mums, Alison began preparing for double the fun.

Her daughter Aurora, seven, and son Ezra, two, would watch birthing videos with their parents to learn about the arrival of their siblings.

“Aurora was there when Ezra was born so she knew what to expect,” the mum adds.

Alison and Erik also took neo-natal resuscitation classes, as the risk of breathing issues during birth is heightened with multiples.

Hiring a birth doula and a photographer, the family felt prepared.

“I was so relaxed the entire time,” Alison says.

At 34 weeks and one day, Alison began having contractions.

Alison calmly began making a Plaster of Paris cast on her belly – a keepsake she thought she had a few weeks left to create.

Meanwhile, Erik started preparing the birthing area by positioning the pool and hanging up fairy lights.

The doula arrived at 10.30pm and the photographer 30 minutes later.

With meditation music playing, Alison centered herself and “rode” each contraction.

Erik set up his laptop with Zoom and dialed in his mother, sister and mother in law so the extended family could watch the birth.

At 1am, Alison slid into the birthing pool as her children woke and walked dreary around to their mother.

“Aurora goes, ‘The babies are coming’,” the woman says.

An hour later, Alison began crowning with baby number one.

Erik gently jumped into the water and caught baby Zoel, bringing him up to Alison’s chest.

“He was so alert,” she smiles.

“I rubbed him on his back and then he let out these little cries.”

A few minutes later, Alison handed Zoel to her doula while she focused on baby two.

This time Aurora, with Erik’s help, gently caught Zion and helped place him on Alison’s chest.

“The whole experience was so calm and peaceful,” Alison smiles.

Both boys were born strong, but with some shallowness in their breathing the couple made the decision to go to hospital for a check up.

There, the boys were placed on a CPAP machine for 24 hours and mum received some help from midwives about breast feeding two.

Mum is number one

Alison understands her choice of birth isn’t for everyone.

But she is sharing her journey to encourage other woman to listen to their bodies.

“I want mothers to know everyone has an option,” she says.

“Sometimes we are pushed into corners but you need to trust your body and do what you feel is right for your baby.”

Alison is now a practicing doula helping bring parents’ dream births to life around the country.

Denial of responsibility! Web Times is an automatic aggregator of the all world’s media. In each content, the hyperlink to the primary source is specified. All trademarks belong to their rightful owners, all materials to their authors. If you are the owner of the content and do not want us to publish your materials, please contact us by email – webtimes.uk. The content will be deleted within 24 hours.
LifestyleParenting
0
Share FacebookTwitterGoogle+ReddItWhatsAppPinterestEmail