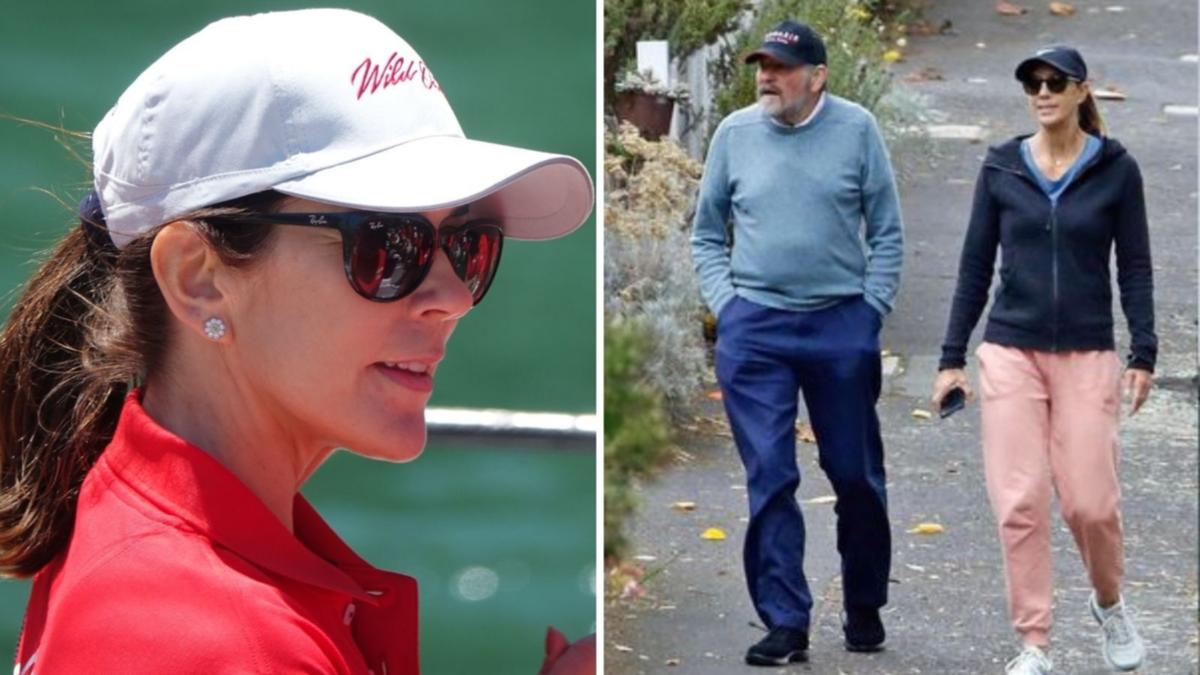 You’d be forgiven for doing a double take if you walked past this pair going for a stroll in Hobart on Wednesday, thinking the lady on the right was Princess Mary.

The Tasmanian-born Crown Princess, who is married to Prince Frederik of Denmark, has been in Australia for a family visit and was spotted recently eating and shopping in Melbourne.

WATCH THE VIDEO ABOVE: Princess Mary spotted in Melbourne

It’s understood she is now in Tasmania catching up with family.

So, as you’d expect, the paparazzi and the royal watchers are out, looking for that special snap of Mary off-duty.

On Wednesday, a picture was taken of Mary’s dad, John, going for a stroll with a woman who looked exactly like the 50-year-old homegrown royal.

But it wasn’t her, and it wasn’t a random doppelganger.

It was her lookalike sister Jane, who could practically be an identical twin, so similar is she to Mary.

Jane resides in Hobart and has three children – son Alexander and daughters Erin and Kate.

Like the rest of Mary’s Australian family, she keeps a low profile out of the spotlight.

Princess Mary was first spotted in Australia on April 1, eating at The Pantry in the upmarket Melbourne suburb of Brighton before doing a spot of shopping along Church Street.

She visited numerous fashion boutiques, including Carla Zampatti, Morrison and Saba, accompanied by her friend and bridesmaid Amber Petty.

A discreet security detail followed at a short distance.

The ever-chic royal was dressed casually in denim trousers, a white blouse and black flats.

“We just kind of let it go because we thought, ‘That’s not possible!’”

Princess Mary, formerly Mary Donaldson, married Prince Frederik in 2004 after the pair met during the Sydney Olympics in 2000.

They have four children – Prince Christian, born in 2005, Princess Isabella, in 2007, and twins Prince Vincent and Princess Josephine, in 2011.

Mary’s Australian visit is her first trip home since 2017, when she returned to her birth country for a family gathering.

She celebrated her 50th birthday on February 5 this year.

The royal had originally planned a lavish banquet dinner at Rosenborg Castle in Copenhagen to celebrate.

But the ongoing COVID-19 crisis put a spanner in the works, forcing her to cancel the event.

‘Why didn’t you tell me?!’ Natalie Barr stunned by Kochie’s Princess Mary admission

Denial of responsibility! Web Times is an automatic aggregator of the all world’s media. In each content, the hyperlink to the primary source is specified. All trademarks belong to their rightful owners, all materials to their authors. If you are the owner of the content and do not want us to publish your materials, please contact us by email – webtimes.uk. The content will be deleted within 24 hours.
celebrityEntertainmentRoyal Family
0
Share FacebookTwitterGoogle+ReddItWhatsAppPinterestEmail