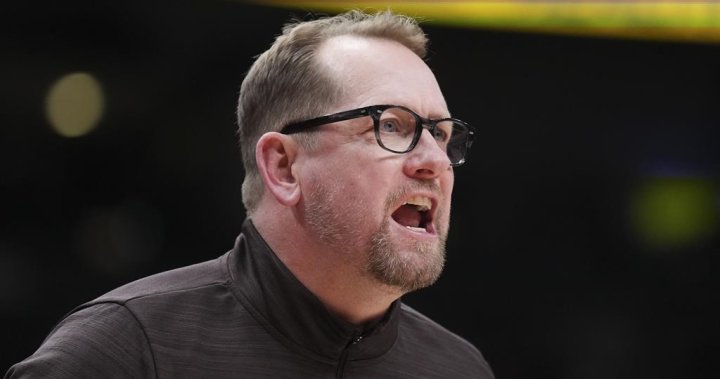 TORONTO – The Toronto Raptors faced obstacles unlike any other NBA franchise last season, roadblocks so unwieldy that Nick Nurse said they were more like “cement walls.”

And so, when the Raptors clinched a playoff berth with Tuesday’s win against Atlanta, it felt like just reward after a 2020-21 season that guard Fred VanVleet said “sapped the soul” of every member on the team.

“It means a lot,” VanVleet said after Tuesday’s win. “We’ve got to just appreciate the journey . . . (we became) a little spoiled, with just expecting the win and excellence it takes to be good every night in this league. That was taken away from us last year, so sitting at home in April and watching the first round of the playoffs when we all felt like we were capable enough to be there stung a little bit.”

While Toronto’s playoff opponent likely won’t be known until the regular-season finale on Sunday, the fact the Raptors are hosting playoff games for the first time in three years feels finally like a sense of normalcy for the 2019 NBA champs.

The Raptors were exiled in Tampa, Fla., last season due to border restrictions and health and safety rules in Ontario. Toronto was the only team forced to play outside its market. They hastily constructed a practice facility in the ballroom of a Marriott hotel.

“Everything was so isolated last year. Even the way we sat on the bench, right? You check out of the game and you go sit in the third row of the stands and watch the game from behind a stanchion,” VanVleet said. “You can’t touch anybody. We’re even scared to fist bump. It was weird. Last year was weird every step of the way and this year has felt a little bit more normal.”

The Raptors were still in the thick of the playoff race last season before a COVID-19 outbreak that even took out more than half of the coaching staff pummelled the team in March. They went 1-14 that month, somersaulting down the Eastern Conference standings to finish 12th. It was the first time they’d missed the playoffs in eight years.

Star point guard Kyle Lowry left for Miami in the off-season. And then most people wrote off the motley crew that remained as having no hope of making the post-season.

“Fast forward to having a group that nobody thought was going to be any good, being here in this position is good,” VanVleet said. “We did what we set out to do, which was have a good regular season . . . and get us a spot where we feel like we belong, and now it’s time to go see what we can do.”

The Raptors gleefully took to Twitter moments after Tuesday’s win, posting “Back where we belong.” Included were screenshots of the numerous Tweets completely writing off Toronto at the start of the season.

“Every year that I’ve been here, they always seeded us lower than what we thought we could be and it just made us work harder,” Raptors forward Chris Boucher said. “I feel like we all knew what we were capable of doing. Last year we thought we would be all right too and COVID hit us . . . this year, when I saw the talent that we had, it was just about putting all the pieces together.”

One of those pieces — and a silver lining to their lowly 12th-place finish — was landing Scottie Barnes in the NBA draft. The 20-year-old has been a revelation, and is a frontrunner for rookie of the year.

Nurse wasn’t sure when the season tipped off what to expect from this team.

“I think they’ve formed some kind of identity, it’s a little quirky and a little different but it’s a hard-playing, competitive identity and they found a way to grind out enough wins to get ’em in this situation,” he said. “I don’t think they were picked to get here so that’s always a good accomplishment.”

In the opening round, the Raptors will play either Boston, Milwaukee or Philadelphia, who were tied for second in the East before Wednesday’s games.

Toronto has three remaining regular-season games, which will likely see VanVleet sit out a good chunk to rest his sore knee. The Raptors host Philadelphia on Thursday, Houston on Friday and end the season Sunday in New York.

The Raptors haven’t lost in the opening round since they were swept by Washington in four games in 2015.

This report by The Canadian Press was first published April 6, 2022.

Denial of responsibility! Web Times is an automatic aggregator of the all world’s media. In each content, the hyperlink to the primary source is specified. All trademarks belong to their rightful owners, all materials to their authors. If you are the owner of the content and do not want us to publish your materials, please contact us by email – webtimes.uk. The content will be deleted within 24 hours.
BasketballKyle LowryNational Basketball AssociationNBAnba playoffSportsToronto RaptorsToronto Raptors playoff
0
Share FacebookTwitterGoogle+ReddItWhatsAppPinterestEmail