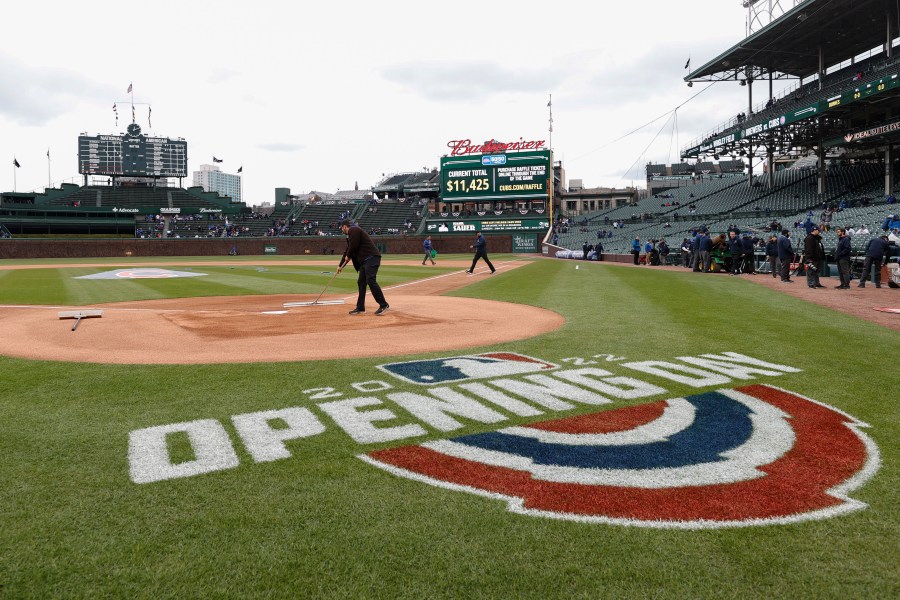 CHICAGO (NewsNation) — Andrew McCutchen got the first hit of the year, up against the still-dormant ivy at Wrigley Field. He delivered as a National League designated hitter. And he was wearing a Roberto Clemente No. 21 patch, too.

A little later on opening day of the 2022 baseball season, Nico Hoerner hit the first home run. He connected off a pitcher who used an electronic wristband to receive his signals from the catcher.

Soon after that, in another yard, the Cleveland Guardians took the field for the first time.

It’s a new season, and definitely a new look all across Major League Baseball.

And if the weather wasn’t quite summer-like in some spots Thursday, well, who cares?

“It might be cold, it might be windy. But it’s opening day,” Cardinals fan Mary Welsh of Belleville, Illinois, said at Busch Stadium before St. Louis hosted Pittsburgh.

Out near Disneyland, where temperatures neared 100 degrees, AL MVP Shohei Ohtani was set to flash his 100 mph heat and take his swings for the Los Angeles Angels.

In Atlanta, the Braves celebrated their World Series championship with a pregame parade. At every ballpark, umpires started to get their say — this year, they’ve joined referees from other sports in announcing replay review decisions to the crowd.

As seats filled up in rainy Washington, chilly Kansas City and more, it seemed fans decided the 99-day owners’ lockout that delayed spring training and pushed back opening day by a week wouldn’t deter them from coming back.

Wearing an Ernie Banks jersey, 23-year-old Philip Lijewski from Guthrie, Oklahoma, enjoyed the view at Wrigley as the Chicago Cubs and Milwaukee Brewers loosened up. He said the anger and acrimony over the labor strife didn’t dampen his enthusiasm for the game.

“Not really,” Lijewski said. “I’m glad that they came to a conclusion sooner rather than later. I was bummed that we didn’t get to do it April 4. But it’s April 7, so not too many days after.”

Baseball is back: MLB kicks off 2022 season

More than eight months after announcing the change, Cleveland played its first regular-season game as the Guardians. Known as the Indians since 1915, the club made the switch in the interest of social justice.
Cleveland wore its road uniforms for the game in Kansas City, with the city name on the jersey.

“Supporting the city is what it comes down to,” star pitcher Shane Bieber said a day before the opener. “Going out there with my teammates, doing it the right way is really all we can do. It was a little bit different getting used to the change, but I’d say we’re all getting used to it day by day.”

Plenty of stars from other sports were at Kauffman Stadium to see top prospect Bobby Witt Jr. and the Royals beat the Guardians 3-1. Kansas City Chiefs coach Andy Reid and several of his players were in attendance, as were members of the Kansas basketball team, which rallied past North Carolina in the men’s championship game Monday night in New Orleans.

A strong wind made it seem much colder than the game-time temperature of 47 degrees and intermittent drizzle turned to streaking pellets of ice during the national anthem.

After earlier rainouts at Yankee Stadium and Target Field, the Brewers-Cubs game became the first game of the season.

Baseball is back: MLB kicks off 2022 season

It was a raw 44 degrees when Chicago right-hander Kyle Hendricks threw the first pitch, which Kolten Wong lofted for a wind-blown popout.

McCutchen sliced a double in the second inning for the season’s first hit, then singled and scored in the fourth for the first run. The 35-year-old McCutchen, the 2013 NL MVP, was Milwaukee’s designated hitter.

As part of the MLB labor deal, the National League has now permanently adopted the designated hitter — the American League began using it in 1973, and the NL added it for the pandemic-shortened 2020 season before going back to letting pitchers hit last year.

Before the Cubs batted in the bottom of the third, the videoboard in left field showed a clip dedicated to pitchers hitting with Sarah McLachlan’s “I Will Remember You” serving as the soundtrack.

“Thank you pitchers. See you in a pinch,” it said at the end.

McCutchen is among several active Roberto Clemente Award winners who will wear No. 21 — the number worn by the late Pirates Hall of Famer — on the backs of their hats and helmets for the rest of their careers.

MLB said it was a “special tribute to his enduring legacy.” The announcement was timed for the 50th anniversary of the year in which Clemente, the Pittsburgh great from Puerto Rico, died in a plane crash while on a humanitarian relief effort.

“It’s a privilege. An honor,” said Nationals slugger Nelson Cruz, a recipient of the Clemente award. “He means so much for baseball, in general. He was an example to follow — how to be professional, on and off the field. A remarkable player and a remarkable human being who lost his life trying to help others.”

“He paid the ultimate price, and whatever we do is not enough,” he said.

Hoerner launched the first homer, a two-run drive for the Cubs off NL Cy Young Award winner Corbin Burnes. Brewers catcher Omar Narváez and Burnes used the newly approved electronic pitch calling system — Narváez could push a button on his wristband to signal what he wanted thrown, without fear of wiggling his fingers and having the sign stolen.

Not that Hoerner needed any help, apparently.

“Who had Nico in the first homer pool?” Cubs manager David Ross kidded after the 5-4 win.

In St. Louis, Tommy Edman’s drive became the first play that resulted in an umpire announcing the result of a replay check.

Ant-Man to Avengers: why there’s more to Anaheim than Disneyland (but it’s a good place to start) | What if … in California