Meet ‘Earendel,’ the most distant star ever seen by the Hubble telescope – National 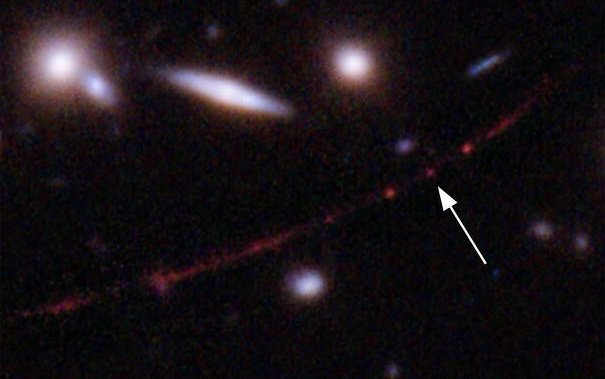 The Hubble telescope has made a new and record-breaking discovery. It has spotted the most distant star — or possible group of stars — astronomers have ever seen.

The star is officially named WHL0137-LS. NASA’s astronomers have nicknamed it “Earendel” from the Old English word meaning “morning star” or “rising light.”

This extraordinary new benchmark detected light from a star that existed within the first billion years after the universe’s birth in the big bang.

According to a NASA press release, the find is a “huge leap, further back in time from the previous single-star record holder” that was detected by Hubble in 2018.

The newly detected star is extremely far away. Its light has taken 12.9 billion years to reach Earth. Scientists say the light currently detectable from Earth is from a time when the universe was only seven per cent of its current age.

#Hubble has spotted the farthest star ever seen! A lucky alignment and natural magnification made it possible for the telescope to see the star’s light, which took 12.9 billion years to reach Earth: https://t.co/bjfAFc94wH pic.twitter.com/pX07SnBm4Y

“We almost didn’t believe it at first, it was so much farther than the previous most-distant, highest redshift star,” said astronomer Brian Welch of the Johns Hopkins University in Baltimore, who worked on the discovery.

“Normally at these distances, entire galaxies look like small smudges, with the light from millions of stars blending together,” said Welch. “The galaxy hosting this star has been magnified and distorted by gravitational lensing into a long crescent that we named the Sunrise Arc.”

Welch says that the discovery is a look back in time to an era of the universe that’s unfamiliar.

“It’s like we’ve been reading a really interesting book, but we started with the second chapter, and now we will have a chance to see how it all got started.”

According to the European Space Agency, Earendel is at least 50 times the mass of Earth’s Sun and millions of times as bright, making it a rival for some of the most massive stars ever discovered.

Earendel was discovered because it exists on, or very close to, a ripple in the fabric of space, allowing the star to appear magnified and brightened. Researchers liken this effect to the rippled surface of a swimming pool on a sunny day. The ripples act as lenses that transmit bright maximum light and brightness onto the pool floor.

However, researchers are still determining if this newly discovered distant star is in fact a single star system, or a cluster of star systems lumped together.

That’s where the James Webb Space Telescope (JWST) will come in.

The JWST, which launched in December 2021, which will eventually replace Hubble, is gearing up for operations. With its increased and powerful optics ability it will be able to provide a sharper image than captured by Hubble.

Researchers say they also hope that the JWST will be able to tell them about Earendel’s temperature and mass, among other properties.

3:10
Talking to an astronomer on the James Webb Telescope team

Denial of responsibility! Web Times is an automatic aggregator of the all world’s media. In each content, the hyperlink to the primary source is specified. All trademarks belong to their rightful owners, all materials to their authors. If you are the owner of the content and do not want us to publish your materials, please contact us by email – webtimes.uk. The content will be deleted within 24 hours.
distant starearendelearendel starHubble TelescopeJames Webb telescopemost distant starnasaScience
0
Share FacebookTwitterGoogle+ReddItWhatsAppPinterestEmail