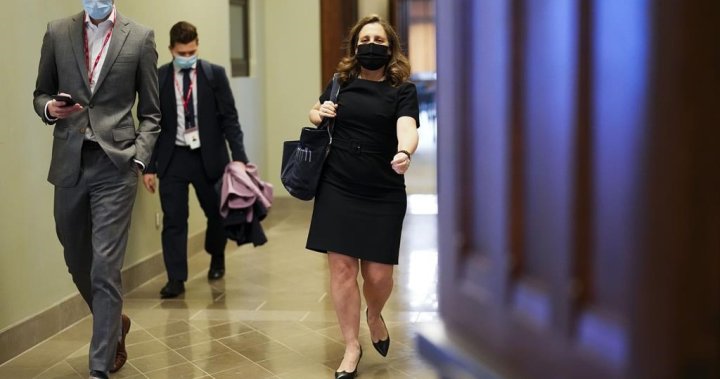 The federal Liberals are set to unveil their latest spending plan today that aims to balance promises made to voters in last year’s election campaign, in the pact with the NDP, and recently to Canada’s global defence allies.

Finance Minister Chrystia Freeland is scheduled to table the budget in the House of Commons this afternoon.

The economy has fared better than anticipated over the past few months, which along with higher prices for oil is expected to pad the government’s bottom line and help offset any new spending to be announced.

Outstanding promises from the Liberals’ campaign platform amount to about $48.5 billion in net new spending, once taking into account new revenues from things like an expected tax on excess bank profits.

Among the promises are measures aimed at addressing housing affordability concerns that have been rising alongside prices and rent since the September vote.

But billions more could be heaped onto federal books to pay for pharmacare and dental care as part of a deal to have New Democrats prop up the minority government, and more for the military as part of an agreement with NATO allies to more quickly ratchet up defence spending.

Speaking Wednesday, Prime Minister Justin Trudeau said the budget would show the country’s debt remains affordable, with debt declining over the coming years as a percentage of the national economy.

Denial of responsibility! Web Times is an automatic aggregator of the all world’s media. In each content, the hyperlink to the primary source is specified. All trademarks belong to their rightful owners, all materials to their authors. If you are the owner of the content and do not want us to publish your materials, please contact us by email – webtimes.uk. The content will be deleted within 24 hours.
Budget Daybudget day 2022CanadaCanada deficitCanadian EconomyChrystia FreelandFederal BudgetFederal budget 2022
0
Share FacebookTwitterGoogle+ReddItWhatsAppPinterestEmail