Kylie Gillies plays with two adorable mini goats, and one poos on set, as the Sydney Royal Easter Show launches for another year 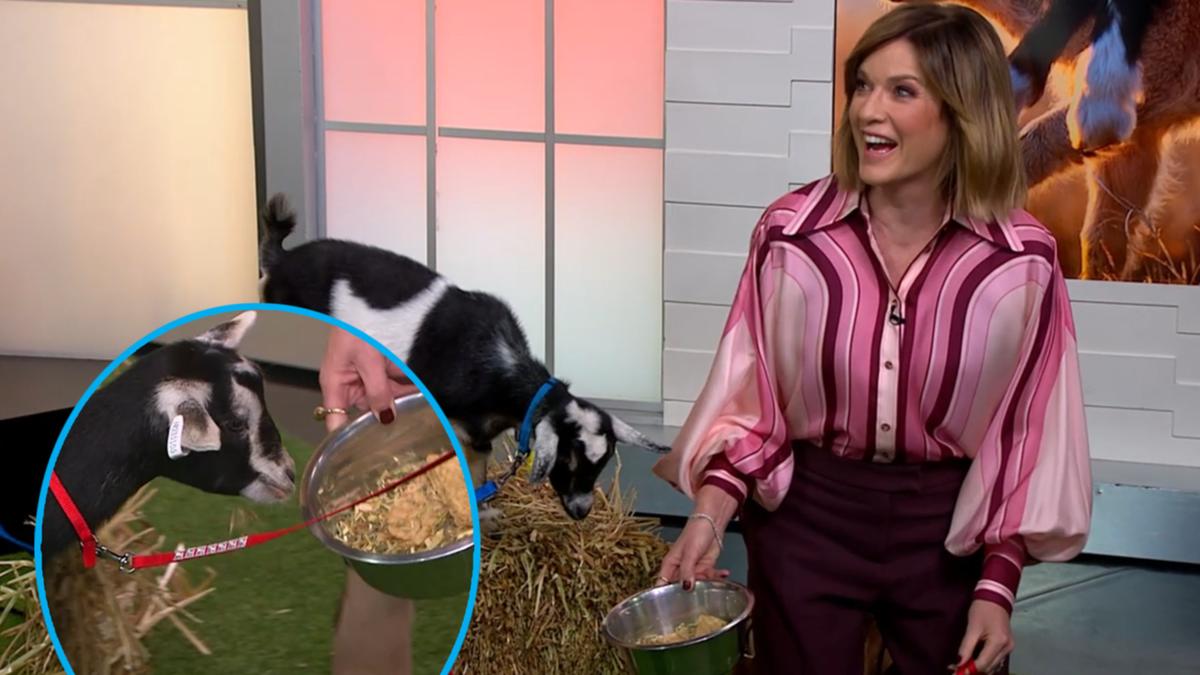 The Sydney Royal Easter Show has a long history of showing and judging all varieties of animals, from cattle and pigs to horses and dogs but this year a new four-legged animal will make its debut.

For the first time ever, adorable mini goats will be on display to be judged on the show’s main stage and to celebrate Royal Easter Show Chairman Mark Schembri joined The Morning Show hosts Kylie Gillies and Larry Emdur with two of this year’s adorable entrants named Charlie and Jeannie.

Schembri explained exactly what the judges will be looking for when they look at goats such as the two he brought with him.

“Any animal that’s judged at the show, they’ve got what we call a breed-type – that’s all the characteristics that are an A-Plus, a gold medal or in this case a grand champion exhibit,” he revealed.

Kylie then took the lead of Jeannie after Charlie relieved himself while Schembri was attempting to handle both animals.

“There’s pooing … do they get extra points for that?” she asked.

Gillies then attempted to lead the goat in a style similar to the way it would be directed while being judged in the ring, but found that Jeannie was more interested in nibbling on one of the hay bales that were included on the set than following The Morning Show host.

“This has so got a new show called ‘Celebrity Goat School’ written all over it,” quipped Emdur.

After failing to tempt the hungry goat away from eating the hay for a quick walk, Kylie instead grabbed a bowl of food that soon caught the animal’s attention, and she managed to lead her around the hay bale with the bowl placed under her nose.

“Look at the way it’s moving, I’ve got the moves … look at the gait,” Gillies pleaded as the goat did a quick walk while eating from the bowl of food.

For all the information you need, including tickets to this year’s Sydney Royal Easter Show visit eastershow.com.au

Denial of responsibility! Web Times is an automatic aggregator of the all world’s media. In each content, the hyperlink to the primary source is specified. All trademarks belong to their rightful owners, all materials to their authors. If you are the owner of the content and do not want us to publish your materials, please contact us by email – webtimes.uk. The content will be deleted within 24 hours.
EntertainmentEntertainment - The Morning ShowFestivalsFrom The Show
0
Share FacebookTwitterGoogle+ReddItWhatsAppPinterestEmail

A walk to one of Britain’s best pubs: The Cock, near St Ives, Cambridgeshire | Travel