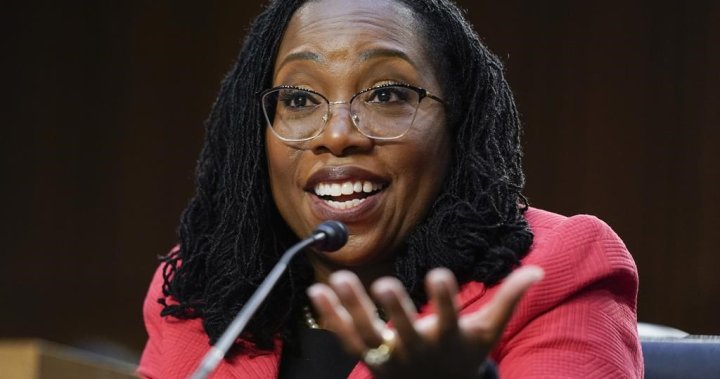 The 51-year-old federal appeals court judge is the third Black justice – after Thurgood Marshall and Clarence Thomas – and the sixth woman to hold that position.

She joins two other women, Sonia Sotomayor and Elena Kagan, on the liberal side of a 6-3 conservative court. With Justice Amy Coney Barrett sitting at the other end of the bench, four of the nine justices are now women for the first time in history.

President Joe Biden, a veteran of a more bipartisan Senate, said from the beginning that he wanted support from both parties for his history-making nominee, and he invited Republicans to the White House as he made his decision.

It was an attempted reset from three brutal Supreme Court battles during President Donald Trump’s presidency, when Democrats vociferously opposed the nominees, and from the end of President Barack Obama’s, when Republicans blocked Supreme Court nominee Merrick Garland from getting a vote.

Before the Senate Judiciary Committee last month, Jackson said her life was shaped by her parents’ experiences with racial segregation and civil rights laws that were enacted a decade before she was born.

With her parents and family sitting behind her, she told the panel that her “path was clearer” than theirs as a Black American. Jackson attended Harvard University, served as a public defender, worked at a private law firm and was appointed as a member of the U.S. Sentencing Commission in addition to her nine years on the federal bench.

“I have been a judge for nearly a decade now, and I take that responsibility and my duty to be independent very seriously,” Jackson said. “I decide cases from a neutral posture. I evaluate the facts, and I interpret and apply the law to the facts of the case before me, without fear or favor, consistent with my judicial oath.”

Once sworn in, Jackson would be the second youngest member of the court after Barrett, 50. She would join a court on which no one is yet 75, the first time that has happened in nearly 30 years.

— With files from The Associated Press

Denial of responsibility! Web Times is an automatic aggregator of the all world’s media. In each content, the hyperlink to the primary source is specified. All trademarks belong to their rightful owners, all materials to their authors. If you are the owner of the content and do not want us to publish your materials, please contact us by email – webtimes.uk. The content will be deleted within 24 hours.
first Black woman supreme courtketanji brown jacksonKetanji Brown Jackson newsKetanji Brown Jackson supreme courtPoliticsSupreme Court NominationU.S. newsU.S. Supreme Court
0
Share FacebookTwitterGoogle+ReddItWhatsAppPinterestEmail