In an Orange Grove in India, a Celebration of Harvest and Love 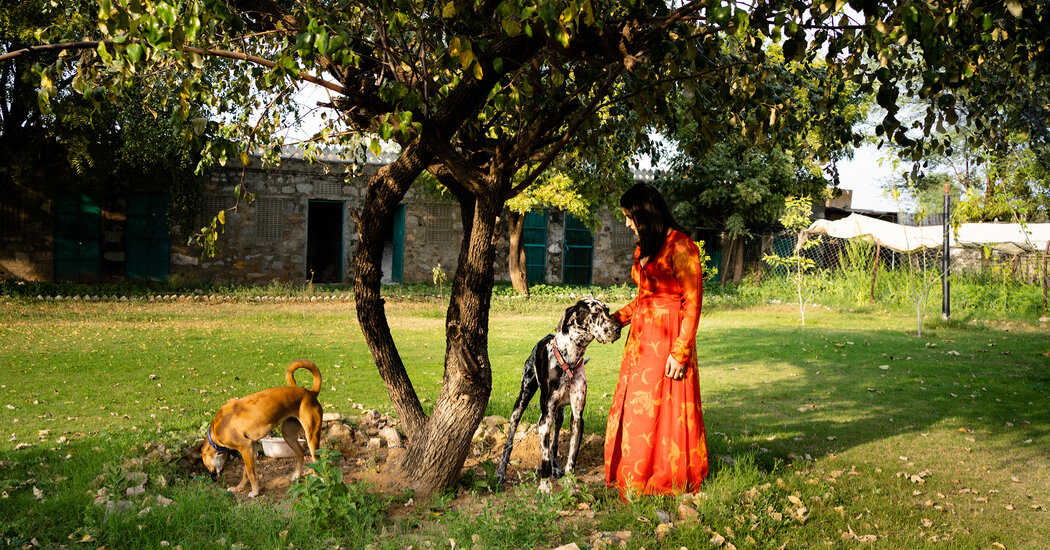 “The longer the party, the happier I am,” says the Indian trapshooter Shagun Chowdhary by phone from Narangah, her family’s organic fruit and vegetable farm on the outskirts of Jaipur, India, where she had recently hosted her first big event. Although guests had come to toast the newly married couple Neha Luthra and Samarth Kasliwal (son of the late jeweler and Gem Palace co-owner Munnu Kasliwal), Chowdhary had her own reason to celebrate: The previous week, she’d qualified for the ISSF’s shotgun World Cup in Lima, Peru. (She ended up placing fourth in her event at the competition, which comes to an end tomorrow.) It was yet another milestone for the 38-year-old athlete who, in 2012, became the first woman to represent India in the sport at the Olympics.

Trapshooting might not be the first thing that comes to mind when one thinks of Indian athletics, and yet four of the country’s 35 Olympic medals have been won by shooters. “Shooting was historically a sport for the royal families of India, or people affiliated with them, but it wasn’t accessible to the rest,” says Chowdhary, whose father, Sushil, formerly the owner of a flour mill factory in Bikaner, met the skeet shooting and clay pigeon shooting champion Maharaja Karni Singh, who later became his instructor, through mutual friends. From an early age, Chowdhary accompanied Sushil to the range, becoming enamored of the sport and pursuing it herself, despite being one of the few women in the field. “My father used to say, ‘You’re my champ, baby, you’re my champ,’” Chowdhary recalls. “He believed in me before I believed in myself.”

Growing up, Chowdhary would regularly spend up to half the year in Italy, where her last coach was based, and where she discovered and fell in love with several boutique hotels on picturesque farms or vineyards. When the pandemic halted her athletic pursuits, she returned to Jaipur and the kinnow orchards where she spent her teenage years: 25 acres resplendent with a thousand orange trees, hundreds of gooseberry trees, fields of wheat, a reservoir with countless fish and a plethora of birds including, at last count, 42 peacocks. Looking around, she saw what it was missing. “I thought, ‘Since we live on this beautiful property, why not let others have access to it, as well?’” she says.

That’s when Chowdhary decided to open a hotel of her own. Although the 12-room inn, which will also have a spa and a farm-to-fork restaurant, won’t be ready for guests until October, she decided to start with a celebratory dinner among the stars. “The orchard wasn’t a place anybody ever thought we would entertain. It’s a place to grow oranges,” says Chowdhary, who admits that getting Narangah into shape for the party was no small feat. It didn’t help that there was no electricity. A driveway had to be created to lead guests — among them the groom’s jeweler brother, Siddharth Kasliwal; the hotelier Manvendra Singh Shekhawat; and the art patron Nandini Singh Jhabua — from a newly built entrance featuring an arch crafted from sheaths of wheat to a 200-foot, lantern-lined trail culminating at the reveal: a lush clearing surrounded by swaying mustard fields, with orange trees dressed in strings of lights and jute lanterns.

The international crowd — friends of the hostess and the newlyweds — mingled under the darkening sky, sipping craft cocktails and, as the night progressed, gathering around firepits and showing off their juggling skills (with oranges). The locals of the group expressed their surprise at being in such a magical spot just a stone’s throw from the center of the bustling city. The hostess was thrilled. “I loved that people had such a great time,” she says, “and that I was the catalyst for making it happen.” Below, Chowdhary offers some tips on how you might put on a relaxed open-air party of your own.

Put Friends and Family to Work

Although entertaining comes naturally to Chowdhary, she admits, “For the last 20 years, it’s been all about training, competing and traveling.” Thankfully, she knew exactly where to go for assistance: a cadre of creative friends who, conveniently, were also invited guests. She sat with one, Aparna Kakrania, to design the harvest-themed invitations. (Dress code: “spring chic.”) The plates, champagne coupes and napkins, hand-painted with an orange motif, were sourced from Ecru, a shop in Jaipur owned by the Lebanese interior designer Nur Kaoukji, who splits her time between Jaipur and Kuwait. Chowdhary’s mother, Shelley, got in on the action as well, designing both Chowdhary’s deep-orange chiffon dress and her citrine, diamond and pearl earrings.

While a 5 p.m. arrival time might seem unusual for a dinner party, many of Chowdhary’s friends, including Akshat Ghiya, the founder of the Tallin jewelry line, and his art consultant wife, Noelle Kadar, came with young children in tow. Chowdhary created a separate kids’ menu of lentils and rice, and set up play areas covered in dhurries and safari tents with queen-size beds, so that putting them down for the night wouldn’t interfere too much with their parents’ fun.

Find a Theme That Brings the Location to Life

Early on in her planning, Chowdhary decided that oranges would be the evening’s decorative stars. Lines of filament bulbs were strategically strung in trees to illuminate them, while large bowls of them were set on pedestals, and a substantial serving table, covered in a cloth painted with a mandarin motif (along with a few bees “for good luck,” she says), featured a long, lush centerpiece of oranges and neem leaves.

“A lot of thought went into the food and the drinks,” Chowdhary says. “I wanted everything to be bite-size — it was meant to be a grazing table, not a buffet table.” Shivika Kothari, co-owner of the Café White Sage and Meraaki Kitchen restaurants in Jaipur, helped her create the vegetarian menu, with ingredients largely sourced from the farm, that included pumpkin and green pea hummus tarts flavored with fenugreek and mustard seeds, tandoori paneer tikka flatbread seasoned with pesto and smoked tomato and puff pastry stuffed with slow-cooked mushrooms and locally sourced thyme and feta. The caterer, Kaku Bhandia, a childhood friend of Chowdhary’s, was tasked with the nonvegetarian offerings: a selection of five “traditional dishes with an international twist,” such as slow-cooked lamb in ghee and Mathania chiles with a fried flatbread shell (a mash-up of junglee maas, a famous Rajasthani dish, and puchka, a typical Indian street food) and orange chicken keema crostini, or minced chicken cooked in spices and orange zest with garlic, coriander, red pepper, tomato and lemon from the farm.

When It Comes to Music, Keep Guests Guessing

The cinematographer Gaurav Mathur provided the music for the event, instinctively switching from jazz to electro swing to classic soft rock to deep house, depending on the mood. As the night’s soundtrack played on, guests sauntered among the trees holding custom cocktails such as the Orchard Martini, a combination of the Singleton of Glendullan 18-year-old single malt Scotch whisky with orange cordial and citrus, and lounged in mudda chairs and handwoven charpais. In Chelsea boots, Chowdhary led the dancing under a star-filled sky. The festivities came to a reluctant end at 2:30 a.m. — “because the sound guy had to leave, not because people had wanted to,” she says. But no matter. Two weeks later, Chowdhary, back to her training regimen, was still basking in the nine-hour party’s success: “We went from a sundowner to a dinner to an after-party. I think we covered it all.”

Amazon plans to object to union victory in New York