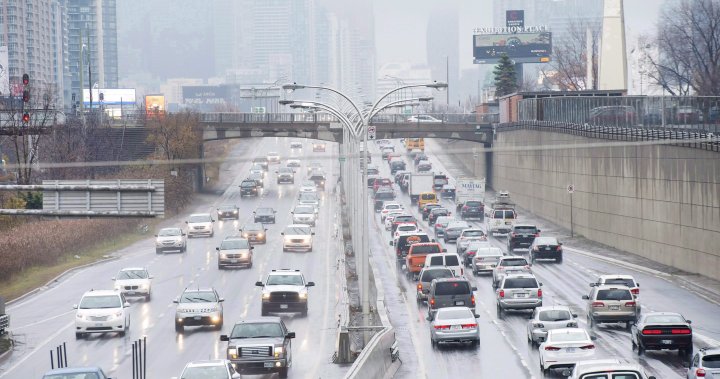 People living in areas with higher levels of air pollution are more likely to develop severe COVID-19 illness that leads to hospitalization and even death, a new study suggests.

The research, published Tuesday in the Canadian Medical Association Journal (CMAJ), found an elevated likelihood of hospitalization, admission to an intensive care unit and death among COVID-19 cases who were chronically exposed to fine particulate matter, nitrogen dioxide and ground-level ozone.

86% of Canadians live in areas where air pollution exceeds WHO guidelines: researchers

The study was conducted by researchers affiliated with Health Canada, which also provided funding.

Researchers identified all COVID-19 cases confirmed in Ontario during 2020 and subtracted long-term care residents and anyone under 20 years of age, leaving them with just over 151,000 cases. Long-term care residents were excluded due to frailty and differences in air pollution exposure compared to the general population.

Using government data, they were able to determine the demographics and location of those cases and cross-referenced with information on neighbourhood air quality.

Ozone exposure was found to be particularly harmful, leading to increased odds of hospitalization, ICU admission and death.

1:49
UBC report says even “safe” levels of pollution are bad for health

The study builds on previous research out of Spain and Mexico that also found links between chronic exposure to air pollution and severe outcomes from COVID-19.

The impacts of poor air quality on respiratory health are well known. Numerous studies have linked air pollution to increased cases of asthma, infections and even death.

A 2019 study out of Harvard University found even short-term exposure to air pollution was linked to everything from urinary tract infections, to skin and tissue infections, to heart failure in addition to respiratory issues.

Health Canada estimates that air pollution contributes to 15,300 deaths per year in Canada, with many more people losing days off their lifespans suffering from asthma and acute respiratory symptoms as a result of pollution.

According to researchers at the Canadian Urban Environmental Health Research Consortium, around 86 per cent of Canadians live in areas where airborne fine particulate matter levels exceed new guidelines set by the World Health Organization last September.

The CMAJ study adjusted for factors that may have also led to increased risk of severe outcomes from COVID-19 and that also correlate with higher levels of air pollution, including neighbourhood income and socioeconomic status.

Yet the researchers found the results stayed consistent despite those adjustments, pointing to a clear link between air pollution and hospitalization or death.

“Given the ongoing pandemic, our findings … could have important implications for public health and health systems,” the researchers write in the report.

The study found that among hospitalized cases, ICU admissions and deaths in Ontario who were diagnosed with COVID-19 in 2020, a plurality of those cases were in the lowest neighbourhood income bracket and scored the highest on the Ontario Marginalization Index, which measures economic well-being.

Research have shown people living in poorer areas are at greater risk of exposure to air pollution, including a national study by Statistics Canada in 2017.

Health Canada was not available to comment on the report Monday due to the Victoria Day holiday.

Denial of responsibility! Web Times is an automatic aggregator of the all world’s media. In each content, the hyperlink to the primary source is specified. All trademarks belong to their rightful owners, all materials to their authors. If you are the owner of the content and do not want us to publish your materials, please contact us by email – webtimes.uk. The content will be deleted within 24 hours.
Air pollutionair pollution health effectsair pollution health impactsAir qualityCanadaCMAJCOVIDcovid 19
0
Share FacebookTwitterGoogle+ReddItWhatsAppPinterestEmail