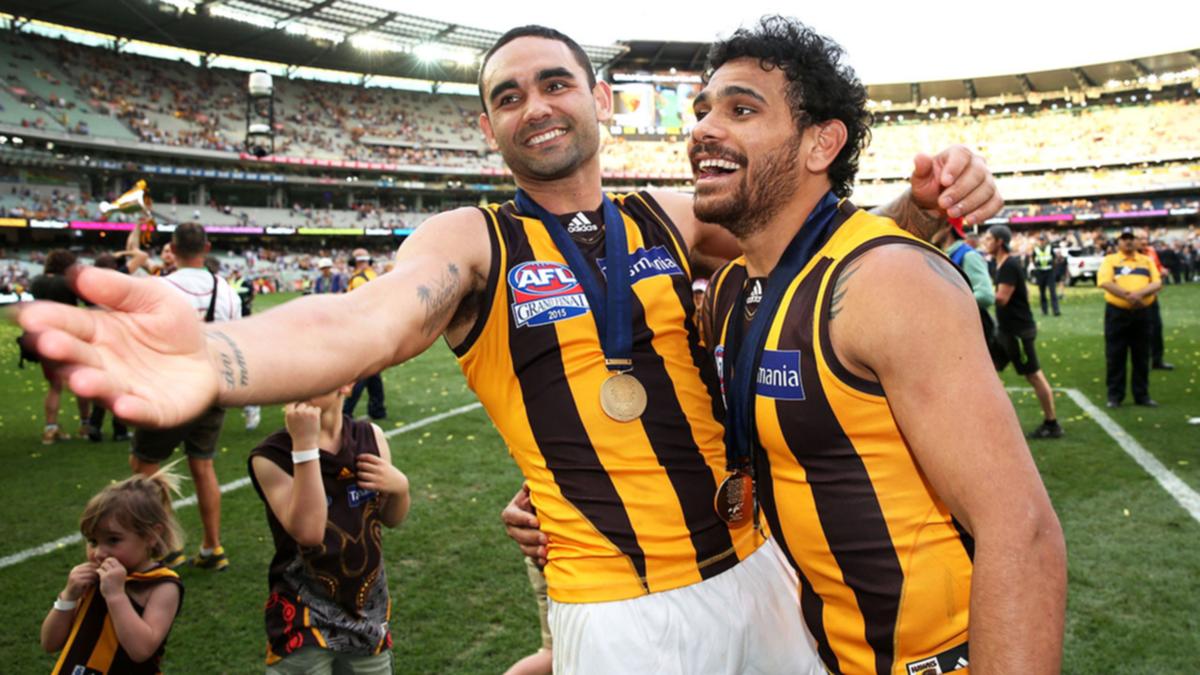 Hawthorn great Shaun Burgoyne has revealed he was left both angry and frustrated after reports emerged last week explaining the racism incidents that pushed his former teammate Cyril Rioli out of the club.

Speaking during Channel 7’s coverage of Port Adelaide’s 32-point loss to Melbourne on Thursday night, Burgoyne said he was disappointed in the way some of the issues were handled both by players and the club.

You can watch Burgoyne address the matter in the video above

Stream Seven’s coverage of AFLW for free on 7plus >>

In particular Burgoyne explained he had no knowledge of an incident that occurred on an end-of-season footy trip in 2013 in which a senior Hawthorn player reportedly asked whether the wife of an Indigenous teammate, who was present at the time, was “also a b***g”.

Burgoyne said the incident, revealed last week by The Age, occurred on an overseas trip he was not involved in, but that was no excuse for it never being raised back at the club and to other players not present.

“It surprised me this week when I read that in the article,” Burgoyne said.

“I had no knowledge of an incident and no knowledge until I read it in the paper, which makes me a little bit angry and a bit frustrated, because if I would’ve known something would’ve been done about it then and there.

“But I didn’t, and I found out this week, which was very surprising.

“I think it was a footy trip in Bali, so I didn’t go on it, I wasn’t there, I’m not sure of the actual details on it.

“It was off-shore but that’s no excuse. The players talked through it and they seemed to have settled it then and there, but things of that magnitude and that importance need to come back to the club and be dealt with in the right way. The players involved are probably learning that now.”

Burgoyne also admitted he had little knowledge of Rioli’s racism issues at Hawthorn, saying his former teammate was quiet and didn’t give away too much about how he was feeling.

In a report in The Age last week, Rioli said he will not return to the club while president Jeff Kennett remains in his post.

The four-time flag hero’s stance is the result of a series of issues that Rioli said fractured the relationship between Hawthorn and its Indigenous players during his time there between 2008 and 2018.

They include comments by Kennett towards Rioli’s wife Shannyn Ah Sam-Rioli in 2018 about her ripped jeans that the club legend said contributed to his decision to end his career at the Hawks at the age of just 28.

Meanwhile, Port Adelaide will have to defy history to qualify for this year’s AFL finals series, but their under-pressure coach Ken Hinkley remains confident they can feature in September.

Only one team has made the top eight from an 0-4 start since 2000, and if Port Adelaide want to make the finals for a third successive year, they’ll have to become the second.

“Why not? We haven’t had everything the way we’ve (liked to) have, but it’s a long season,” Hinkley said after the Power’s 32-point loss to Melbourne at Adelaide Oval on Thursday night.

“I get that people question my belief, but I’m strong in it – I think we can absolutely move forward and improve quickly.”

But to turn things around, the Power will need avoid offensive performances like the one they produced against the Demons as they were held to their first goalless half since entering the AFL in 1997.

“I never want to play in games of football where we don’t score goals… it’s not a title we want,” Hinkley said.

“No-one is more frustrated than us, and we understand the fans’ frustration because they want their team to be playing well.

“Our players and our coaching staff and our whole football club will stick together and work really hard to make sure we quickly get back on track somewhere close to what they would love us to be playing like.

“We’re desperate for it to turn around.

“I know it can be hard to accept, but we’re working towards making us better quickly and hanging in there.

“At the moment, we’re hanging in there in a position we’d much rather not be in.”

Port Adelaide could get a boost to their scoring potency for their next match against Carlton with star veteran Robbie Gray almost certain to be available after being forced out of the meeting with the Demons due to entering COVID protocols.

But it’s unclear whether Trent McKenzie (knee) or Scott Lycett (shoulder) will take on the Blues.

McKenzie was a late withdrawal while Lycett hurt himself in the second quarter, although he managed to play out the game.

“Talk about being in the wars, Trent has been in them,” Hinkley said.

“He’s had another little incident somewhere between last week’s game and getting ready to play this week and it looks like his knee’s not quite right, so we’ll investigate that further.”

Star Power midfielder Ollie Wines was sent to hospital as a precaution after feeling ill during the game and being subbed out at halftime.

Denial of responsibility! Web Times is an automatic aggregator of the all world’s media. In each content, the hyperlink to the primary source is specified. All trademarks belong to their rightful owners, all materials to their authors. If you are the owner of the content and do not want us to publish your materials, please contact us by email – webtimes.uk. The content will be deleted within 24 hours.
AFLHawthorn HawksSport
0
Share FacebookTwitterGoogle+ReddItWhatsAppPinterestEmail