Giant redwoods to Snoopy: five of the best places to visit in the Sonoma valley | What if … in California 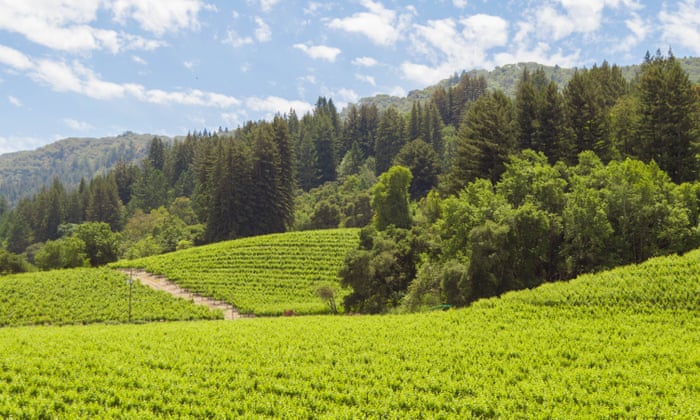 Sonoma County is around a 90-minute drive from San Francisco, but feels a world away from the city, making it prime minibreak material for the Bay Area’s work hard, play hard crowd. And for epicurean international travellers exploring California on four wheels, Sonoma is what road trip dreams are made of, with picture-perfect vineyards and rolling hills, world-class restaurants and inviting tasting rooms to dip into along the way.

California’s almost supernaturally fertile and biodiverse landscape gives rise to reliably excellent locally grown produce, all spectacularly showcased in a farm-to-table dining scene that is the envy of chefs around the globe. But nowhere is the Golden State’s abundance more evident than in the Sonoma valley – bordered to the east by the Mayacamas, and to the west by the Sonoma mountain range. Nestled in the valley, gorgeous vineyards, hip boutique hotels, amazing restaurants and more than 4,850 hectares (12,000 acres) of dedicated parkland amount to a vast idyll for wine lovers and food obsessives from around the globe. Start with the Three Sticks Wines tasting room in the landmark Vallejo-Castenada Adobe building, dating back to 1842, and then check out some of these other places:

Spirit Works Distillery
Everyone knows Sonoma is synonymous with wineries, but the valley is also home to more than 50 breweries, cideries, and distilleries, with a reputation for one of the most vibrant craft drinks scenes on the planet. Spirit Works Distillery was awarded National Distillery of the Year in 2020 and voted Best Distillery in Sonoma County, for its commitment to the grain-to-glass philosophy of bringing in whole organic grains that are then milled, mashed, fermented and distilled, entirely on site.

“Here in Sonoma County, the spirits scene really is booming and we’re proud to be a part of that new energy,” says head distiller Ashby Marshall, part of the husband-and-wife team who established Spirit Works in the city of Sebastopol in 2012. “We make award-winning vodkas and whiskies – but for British visitors, I always like to highlight our traditionally made sloe gin. Sloe gin isn’t so well-known in the US, but my husband is British and we love winning over new fans in our tastings.”

The Spirit Works distillery and tasting room is located in The Barlow, a five-hectare (12-acre) open-air artisan marketplace on Sebastopol’s east side, with a community market, art galleries, cheesemakers and interiors stores among the 40-plus vendors. Make an afternoon of it.

Flowers Vineyards and Winery
Sonoma is dotted with charming small towns, but many visitors find themselves especially seduced by Healdsburg and the surrounding wineries. For wine-lovers who care about organic and responsible farming methods, a visit to the House of Flowers in Healdsburg is a must. California native Chantal Forthun has led the winemaking team at Flowers Vineyards and Winery since 2012, prioritising sustainability, responsible growing and respecting the land and people of the Sonoma valley region.

Forthun studied native yeasts for many years and has pioneered many “low intervention” winemaking techniques, although, as she says, “at Flowers, ‘minimal intervention’ doesn’t mean hands-off; it actually means more hands are involved in the preparation, requiring us to be present in each moment, through every step of the process.” The newly restored House of Flowers is a 1970s architectural delight with a stone-tiled fireplace, oak floors and cypress walls, reached through a shady redwood grove, offering wine-tastings of the house vintages of pinot noir, chardonnay and rosé alongside seasonal produce. It’s just a five-minute drive or 20-minute cycle (try Spoke Folk for rentals) from the independent galleries, bakeries and boutique hotels of downtown Healdsburg.

Charles M Schulz Museum
San Francisco has the excellent Cartoon Art Museum, but Sonoma County has the delightfully quirky Charles M Schulz Museum, dedicated to the creator of the Peanuts comic strip. For fans of Charlie Brown and Snoopy, this small but perfectly formed museum offers a delicious dose of childhood nostalgia and intriguing insights into this eternally popular franchise. Schulz, who moved his home and studio to Santa Rosa in 1969 and lived there until his death in 2000, drew some 18,000 strips in his lifetime, of which 7,000 are owned by the museum. There’s an oversized birdbath in the courtyard patio, a ceramic tile mural, and a recreation of Schulz’s studio. The museum is right round the corner from a favourite haunt of Schulz’s, a public ice rink with an on-site cafe where you can sip a hot chocolate while watching the skaters circle the rink. The locals love to reminisce about how Schulz ate breakfast or lunch at Snoopy’s Home Ice cafe virtually every single day.

Jack London state historic park
Many visitors only associate Sonoma with food and wine, but the Sonoma valley is one of the most beautiful regions in California, and countless hiking, biking and kayaking opportunities are there for the taking. Perhaps the most appealing natural park in the region is Jack London state historic park, named for the literary legend and local hero. This park sits within the ancestral territory of the Coast Miwok, represented today by the Federated Indians of Graton Rancheria. In spring, wildflowers proliferate in the woods and grasslands, while in autumn the park’s black oaks and big-leaf maples turn amber hues.

But for many international visitors, it’s the giant redwoods that are the big draw, and these spectacular trees are beautifully showcased along the Giant Ancient Redwood Trail, a four-mile hike through grassy meadows and redwood-filled canyons. The nearby hamlet of Glen Ellen is also worth exploring, perhaps to pick up a picnic of artisan cheeses and freshly baked bread at Glen Ellen Village Market, before heading for the redwoods.

Guerneville Bank Club
Ever since the 1970s, LGBTQ+ travellers have claimed the Russian River valley resort town of Guerneville as their own, with the sleepy logging hamlet evolving naturally into one of the US’s most fun-loving destinations. The campsites, cute cabins, retro motels and spa hotels cater for a diverse influx of visitors from around the state, and today Guerneville possesses a progressive, relaxing, rustic charm – complemented by a cultured drinking and dining scene.

An early stop on any visit to the town and Russian River wine region nearby has got to be Guerneville Bank Club, an iconic banking building now housing a historical society, wine vault and gallery, ice-cream dairy and bakery. This community of makers, bakers and historians has breathed new life into a 1920s landmark in downtown Guerneville, putting this Main Street location back on the map. There’s Chile Pies Baking Company, Nimble & Finn’s Homemade Ice-Cream and The Wine Vault, perfect for refuelling after a day canoeing downriver, or hiking the redwood trails of Armstrong Redwoods State Natural Reserve.