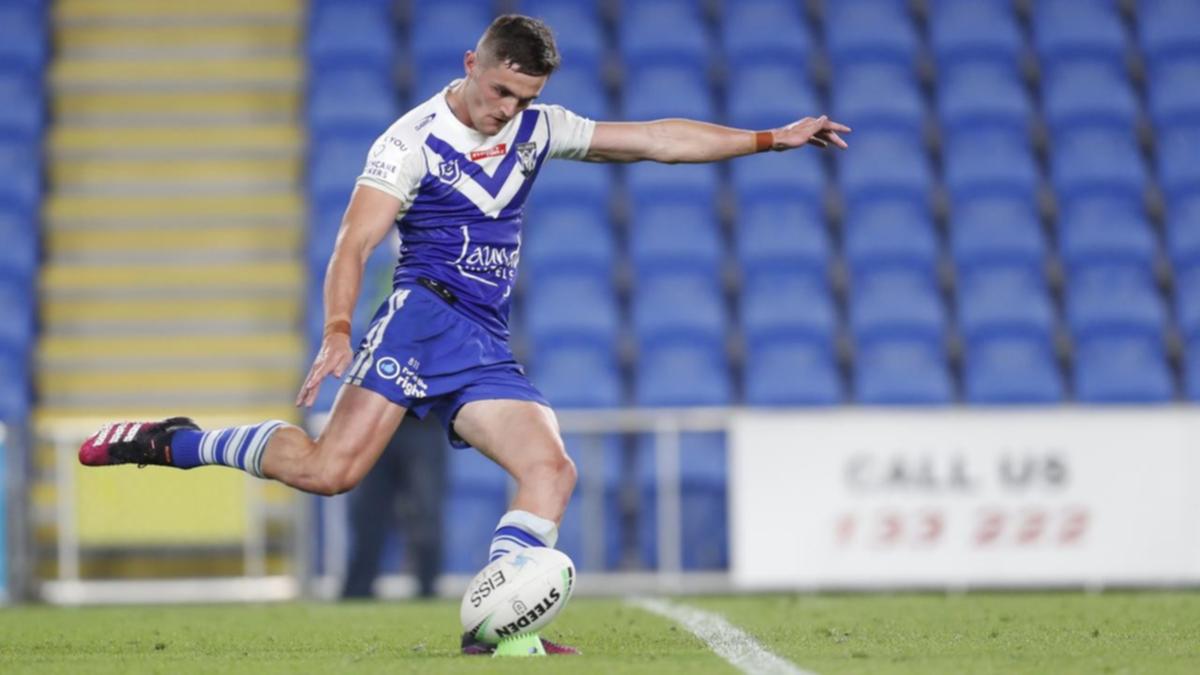 Trent Barrett claims Canterbury always planned to bring Kyle Flanagan back from NRL exile and into first grade, venting his frustration of criticism levelled against the club.

Flanagan’s return against defending premiers Penrith has prompted fierce debate around the Bulldogs’ handling of the half, with the team on a three-game losing streak.

Barrett has been accused of setting the halfback up to fail in the clash against Penrith, with Canterbury’s last premiership-winning five-eighth Braith Anasta labelling the selection a hospital pass.

That in itself prompted a staunch defence from Phil Gould, adamant he was a major part of the decision in how to treat the 23-year-old this pre-season.

But the Bulldogs are confident the time is right for Flanagan to be Matt Burton’s third halves partner in five games.

Dropped after nine rounds last year and used sparingly since then, Flanagan has helped the Bulldogs to an undefeated opening month in reserve grade while taking the line on and playing with confidence.

“We had a plan from the get go, so we stuck to it,” Barrett said.

“I think it’s worked. Kyle’s performances (in NSW Cup) have helped him relax a little and he’s playing well.

“They’re the only factors that really came into it, when we thought he was ready.

“There were discussions with Kyle and other people close to him about how we wanted him to develop.

“We thought that he needed time to work on a few things in his game. And to his credit, he’s done that.”

Barrett said he had not had conversations with Flanagan around how long the No.7 jersey would be guaranteed, after both Jake Averillo and Brandon Wakeham lasted only two weeks.

Instead, he claimed he hoped Flanagan could hold it for the next 10 seasons, insisting he was what the Bulldogs now needed at halfback.

“We don’t have to have those conversations. Kyle’s a grown man,” Barrett said.

“We’ve got to pick teams that we think can win on the weekend and give us our best chance of winning.

“We think he can help with our direction. Our attack inside 20 has been been a little bit ordinary I thought.

Barrett does however fear the spotlight on Flanagan this week will add unwanted pressure on the half, after arriving at Canterbury last year when released following one year at the Sydney Roosters.

“(The commentary is) disappointing,” Barrett said.

“We would like to be looking at the other side of it, celebrating how hard Kyle has worked to get back in the team,” Barrett said.

“That’s where the focus should be, not on the rest of it and all the innuendo.

“He’s earned his spot, where that gets misconstrued through all this other stuff I don’t know.”

Denial of responsibility! Web Times is an automatic aggregator of the all world’s media. In each content, the hyperlink to the primary source is specified. All trademarks belong to their rightful owners, all materials to their authors. If you are the owner of the content and do not want us to publish your materials, please contact us by email – webtimes.uk. The content will be deleted within 24 hours.
Rugby LeagueSport
0
Share FacebookTwitterGoogle+ReddItWhatsAppPinterestEmail

Which countries have the best passports? Most are in Europe

Up to 65% of Africans have had COVID, far more than thought