Emergencies Act inquiry: ‘Tension’ between police, oversight board over lack of plan – National 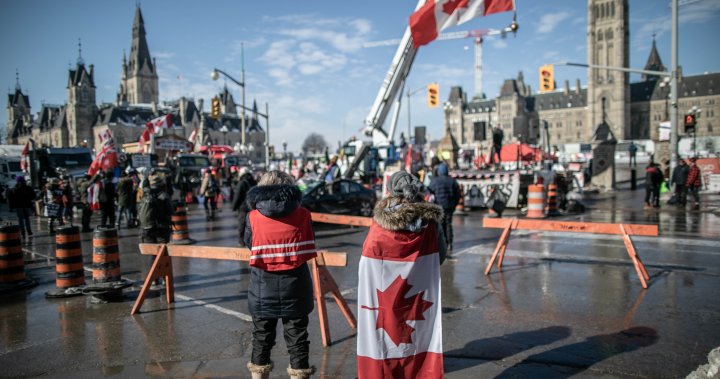 As the so-called “Freedom Convoy” protesters dug in their heels and blared their horns in downtown Ottawa, there was tension between the police service and its oversight board as calls grew to come up with a plan to remove the demonstrators, according to the former chair of that board.

There’s always a “push and pull” between the police services board and their corresponding police service, according to Ottawa city councillor Diane Deans, who served as the chair of the Ottawa Police Services Board during the protests in February.

“We’re only entitled to this much, and we can’t interfere. There is some tension between boards and the service in this regard,” Deans told the Public Order Emergency Commission on Wednesday.

“I think it’s fair to say that as this occupation of our city continued, the board started pushing harder and harder for more details around that plan and were perhaps a little more emboldened in recognizing that we needed that information.”

The seven-member board is a civilian body tasked with overseeing the Ottawa Police Service. While the board cannot direct police operations, its members can set priorities for police.

But during the convoy protests, Deans said the police provided the board with very little information about their plan to deal with demonstrators that had installed themselves throughout downtown Ottawa.

People protesting COVID-19 public health measures had descended on downtown Ottawa, as well as multiple border crossings across the country, and dug in for weeks. City streets in Ottawa were snarled and businesses were forced to shut their doors as residents were subjected to non-stop honking.

In the early days of the protests, Deans told the inquiry that then-Ottawa Police Chief Peter Sloly had told her he would be “very surprised” if the protesters, who had arrived late Friday and throughout Saturday on the last weekend in January, would still be in Ottawa come Monday.


They ended up staying put for three weeks, until the federal government invoked the Emergencies Act and multiple police services and tow truck operators banded together to remove the demonstration. The inquiry is tasked with studying whether the use of this controversial legislation was justified.

Deans told the inquiry that, in the early days of the demonstration, police had assured her the protest would proceed normally.

“(Sloly) did tell me that he did not feel that anything that they were receiving through intelligence channels would lead them to believe that this was (anything) other than a protest that would come and go in a typical fashion,” Deans said.

The city councillor said the board did not request a briefing from police about the protest until after the demonstrators arrived in Ottawa.

In an Ontario Provincial Police (OPP) situational awareness bulletin dated Jan. 26, which was made public at the inquiry on Tuesday, the provincial police had warned that convoy organizers planned to stay.

“Once in Ottawa, Freedom Convoy 2022 organizers have stated an intent to remain at Parliament Hill until the Federal government concedes to repeal all COVID-19 public health restrictions and mandates,” the bulletin stated.

“Organizers have indicated they are planning to stage disruptions that may gridlock areas around Parliament buildings and parts of Ottawa. There is no expressed departure date for when participants will disperse or the action will end.”

It also cautioned that the convoy could include the presence of ideologically motivated extremists, “public order events,” and people looking to escalate the demonstrations in an “illegal” way.

However, in her testimony, Deans insisted that Sloly assured her that all the intelligence he received indicated the protesters would leave after a few days.

“Chief Sloly was telling me things like, you know, we’re not getting any messages from intelligence agencies that it’s other than a protest. We expect them to be gone on Monday,” she said.

“That’s … the message I was getting.”

Deans said that within days of the convoy encamping in city streets, it was clear that there had been a “breakdown” in Sloly’s negotiations with the protesters. However, she said the board faced pushback when it tried to schedule meetings with police to better understand the situation — and the plan to address it.

“I was being advised by some people that I needed to limit the number of meetings that we were calling because police resources were stretched thin,” Deans said.

“This was the real point of tension in the whole thing, that we needed to have a solid plan that needed to be properly resourced and there was this continuing tension that we weren’t getting the resources that we needed.”

Deans was ousted from her role on the board three weeks into the convoy protests, over what she said was a disagreement with Ottawa Mayor Jim Watson over his decision to negotiate with leaders of the convoy protest. Watson, however, denies this and says it was due to her decision to hire a new interim police chief amid the demonstration.

A transcript released Tuesday of a phone call between Prime Minister Justin Trudeau and Watson showed that Trudeau accused Ontario Premier Doug Ford of “hiding from his responsibility” to help with the convoy for political reasons.

The document was presented as evidence submitted during Watson’s testimony on Tuesday.

Speaking on his way into a meeting in Ottawa on Wednesday, Trudeau said there were times during the “Freedom Convoy” protests that the three levels of government were not working together as well as they could.

But he says what’s important is that in the end, everyone came together to end the occupation of downtown Ottawa.

Correspondence presented to the inquiry shows city and federal officials felt Ford’s government was absent from meetings called to deal with the demonstrators who were refusing to leave the streets around Parliament Hill.

Earlier this week, Ford said he supported Trudeau’s use of the Emergencies Act, and that they stood shoulder to shoulder.

The hearings are expected to run for six weeks, with testimony from 65 witnesses representing all levels of government, various police agencies, as well as organizers of the convoy.

— with files from The Canadian Press

Denial of responsibility! Secular Times is an automatic aggregator of the all world’s media. In each content, the hyperlink to the primary source is specified. All trademarks belong to their rightful owners, all materials to their authors. If you are the owner of the content and do not want us to publish your materials, please contact us by email – seculartimes.com. The content will be deleted within 24 hours.
CanadaConvoy police responseconvoy to Ottawaconvoy to ottawa 2022Diane DeansEmergencies ActEmergencies Act inquiryEmergencies Act inquiry latest
0
Share FacebookTwitterGoogle+ReddItWhatsAppPinterestEmail