Dental care program for kids under 12 will roll out by end of year: Budget 2022 – National 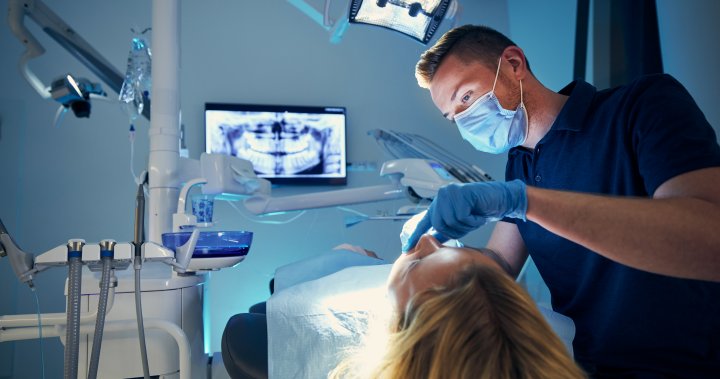 Canadian families with kids under the age of 12 should be able to access a new dental care coverage plan before the end of the year – if their income is less than $70,000 annually.

That’s the promise laid out in the Liberal government’s latest budget, which pledges to provide funding of $5.3 billion over five years for the promised program, starting this year.

Dental care will then be rolled out to those under the age of 18, seniors and people living with a disability in 2023. Then, by 2025, it’ll be fully implemented – though anyone in a household with income over $90,000 annually won’t have access to the proposed program.

Households bringing in between $70,000 and $90,000 per year could have co-pays on their coverage, but any household that makes under $70,000 shouldn’t have to pay out of pocket, the budget claims.

The promise makes good on a deal the Liberals made with the NDP last month. NDP Leader Jagmeet Singh promised his party will keep the Liberals in government until 2025 in exchange for progress on issues the NDP cares about – including dental care.

Speaking shortly after the budget was tabled, Singh said the dental care plan is going to be “life changing for a lot of Canadians.”

“Justin Trudeau is basically taking money that he’s been collecting from Canadians who are suffering because of inflation, and he’s using it to pay for the promises that he made to the NDP,” Bergen said.

The Parliamentary Budget Office (PBO) costed a national dental care plan in the fall of 2020 and found that roughly 6.5 million Canadians would benefit from such a program during the first year – a number that would likely lower to 6.3 million by 2025.

He projected that, in order to establish dental care coverage for any households with a combined income of under $90,000 annually, the government would have to shell out an annual cost of $1.5 billion per year through to 2024-2025.

Budget 2022: 4 things that will affect your pocketbook

The PBO also projected there would be a one-time, upfront cost of around $3 billion as people address untreated dental issues.

If this costing is correct, the $5.3 billion the government has earmarked for the program could be chewed up in the first two years – despite the budget plan to spread the funding over five years.

However, the PBO costing assumed everyone would have immediate access to the program – making the upfront costs much higher than what we’d see with Budget 2022’s age-based phase-in of the program, one economist said.

“By staging it, they’re not expecting the same surge … of the full universal program upfront,” said Sahir Khan, executive vice president at the University of Ottawa’s Institute for Fiscal Studies and Democracy.

A senior government official explained that the costs are also subject to revision – so the final figures could change.

Denial of responsibility! Web Times is an automatic aggregator of the all world’s media. In each content, the hyperlink to the primary source is specified. All trademarks belong to their rightful owners, all materials to their authors. If you are the owner of the content and do not want us to publish your materials, please contact us by email – webtimes.uk. The content will be deleted within 24 hours.
budget 2022budget dental careCanadaCanada BudgetCanada budget 2022Dental Caredental care canadadentalcare
0
Share FacebookTwitterGoogle+ReddItWhatsAppPinterestEmail