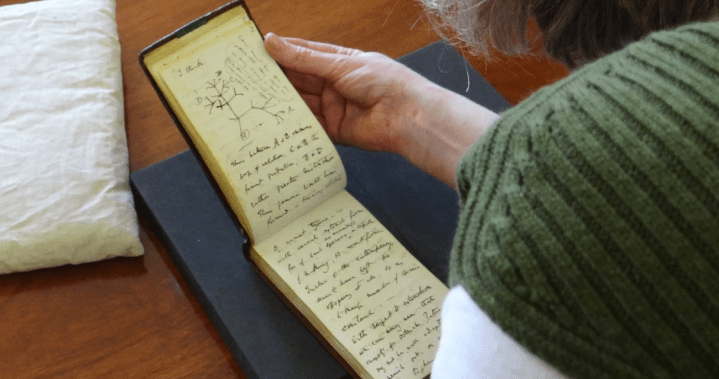 Two notebooks belonging to naturalist Charles Darwin have been returned to Cambridge University’s library, two decades after they mysteriously disappeared. One of the notebooks contains the scientist’s famous “Tree of Life” sketch, which revolutionized our understanding of evolutionary biology.

The university announced on Tuesday that the manuscripts were returned anonymously and in good condition inside their original archive box. They were left inside a pink gift bag with a note wishing the university’s librarian a happy Easter.

On March 9, the gift bag appeared outside the librarian’s office, a spot not covered by CCTV cameras.

The notebooks went missing in 2001 after they were removed from Cambridge’s archive for photographing. When the manuscripts — worth millions — first disappeared, library staff thought they had simply been misplaced.

Multiple searches were carried out through the university’s archive, which consists of around 10 million books, maps, manuscripts, and objects. After the largest search in the library’s history was carried out in 2020, staff came to the conclusion that the notebooks had been stolen.

Some 15 months ago, local police partnered with Interpol to conduct an international hunt for the missing notebooks. The police investigation into their disappearance is still ongoing and a spokesperson for Cambridgeshire police said they are “following up some lines of inquiry.”

Back to its origin: First edition ‘On the Origin of Species’ book returned to MSVU library

Jessica Gardner, Cambridge University’s librarian, expressed her immense joy that the books are back in the university’s collection with help from the public.

“Everyone at the Library was incredibly touched by the response to our appeal and to know that so many others felt the same sense of loss we did only reaffirmed our decision to ask the public for their help,” she said.

“We believe that decision has had a direct bearing on the notebooks being returned and we’d like to take this opportunity to give the public our heartfelt thanks.”

Darwin filled these notebooks after returning from his famous international voyage aboard the HMS Beagle. The ideas he jotted down would eventually lay the groundwork for his magnum opus on evolution, On the Origin of Species.

The manuscripts are famous in the world of evolutionary biology and are known as the “transmutation notebooks.” They are considered the starting point for Darwin’s theory of how species could pass down adaptations to their environment across generations.

The notebooks will be displayed to the public as part of a free exhibition called “Darwin in Conversation.” Visitors can view the important documents starting July 9. They will be featured alongside 15,000 letters Darwin wrote during his lifetime.

“They may be tiny, just the size of postcards, but the notebooks’ impact on the history of science, and their importance to our world-class collections here, cannot be overstated,” Gardner noted.

LAST RIDE OF THE 4 HORSEMEN is launching next week

In Paris, a Wine Bar Inspired by Tokyo’s Jazz Cafes