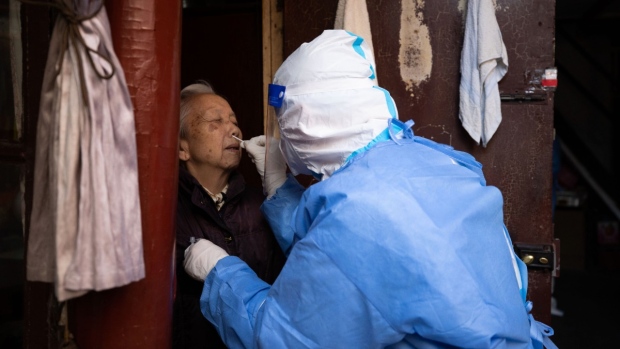 BEIJING —
Residents of Shanghai are struggling to get meat, rice and other food supplies under anti-coronavirus controls that confine most of its 25 million people in their homes, fuelling frustration as the government tries to contain a spreading outbreak.

People in China’s business capital complain that online grocers often are sold out. Some received government food packages of meat and vegetables for a few days. But with no word on when they will be allowed out, anxiety is rising.

Zhang Yu, 33, said her household of eight eats three meals a day but has cut back to noodles for lunch. They received no government supplies.

“It’s not easy to keep this up,” said Zhang, who starts shopping online at 7 a.m.

“We read on the news there is (food), but we just can’t buy it,” she said. “As soon as you go to the grocery shopping app, it says today’s orders are filled.”

The complaints are an embarrassment for the ruling Communist Party during a politically sensitive year when President Xi Jinping is expected to try to break with tradition and award himself a third five-year term as leader.

Shanghai highlights the soaring human and economic cost of China’s “zero-COVID” strategy that aims to isolate every infected person.

Complaints about food shortages began after Shanghai closed segments of the city on March 28.

Plans called for four-day closures of districts while residents were tested. That changed to an indefinite citywide shutdown after case numbers soared. Shoppers who got little warning stripped supermarket shelves.

Officials say Shanghai, home of the world’s busiest port and China’s main stock exchange, has enough food. But a deputy mayor, Chen Tong, acknowledged Thursday getting it the “last 100 metres” to households is a challenge.

“Shanghai’s battle against the epidemic has reached the most critical moment,” Chen said at a news conference, according to state media. He said officials “must go all out to get living supplies to the city’s 25 million people.”

At the same event, a vice president of Meituan, China’s biggest food delivery platform, blamed a shortage of staff and vehicles, according to a transcript released by the company. The executive, Mao Fang, said Meituan has moved automated delivery vehicles and nearly 1,000 extra employees to Shanghai.

Another online grocer, Dingdong Maicai, said it shifted 500 employees in Shanghai from other posts to making deliveries.

Li Xiaoliang, an employee of a courier company, complained the government overlooks people living in hotels. He said he is sharing a room with two coworkers after positive cases were found near his rented house.

Li, 30, said they brought instant noodles but those ran out. Now, they eat one meal a day of 40 yuan (US$6) lunch boxes ordered at the front desk, but the vendor sometimes doesn’t deliver. On Thursday, Li said he had only water all day.

The local government office “clearly said that they didn’t care about those staying in the hotel and left us to find our own way,” Li said. “What we need most now is supplies, food.”

After residents of a Shanghai apartment complex stood on their balconies to sing this week in a possible protest, a drone flew overhead and broadcast the message: “Control the soul’s desire for freedom and do not open the window to sing. This behaviour has the risk of spreading the epidemic.”

The government says it is trying to reduce the impact of its tactics, but authorities still are enforcing curbs that also block access to the industrial cities of Changchun and Jilin with millions of residents in the northeast.

While the Shanghai port’s managers say operations are normal, the chair of the city’s chapter of the European Chamber of Commerce in China, Bettina Schoen-Behanzin, said its member companies estimate the volume of cargo handled has fallen 40%.

Some large factories and financial firms are having employees sleep at work to keep operating. But Schoen-Behanzin said with no timetable to end lockdowns, “some workers aren’t volunteering any more.”

Residents of smaller cities also have been confined temporarily to their homes this year as Chinese officials try to contain outbreaks.

In 2020, access to cities with a total of 60 million people was suspended in an unprecedented attempt to contain the outbreak. The ruling party organized vast supply networks to bring in food.

A resident of the Minhang district on Shanghai’s west side who asked to be identified only by her surname, Chen, said her household of five was given government food packages on March 30 and April 4. They included chicken, eggplant, carrots, broccoli and potatoes.

Now, vegetables are available online but meat, fish and eggs are hard to find, Chen said. She joined a neighborhood “buying club.” Minimum orders are 3,000 yuan ($500), “so you need other people,” she said.

“Everyone is organizing to order food, because we can’t count on the government to send it to us,” Chen said. “They’re not reliable.”

A message from a viewer of an online news conference by the city’s health bureau challenged officials: “Put down the script! Please tell leaders to buy vegetables by mobile phone on the spot.”

Gregory Gao, an operations specialist for an automaker who lives alone in the downtown Yangpu district, said only Meituan remains after food sellers said supply sites in the area were closing.

Zhang said some of her neighbours have run out of rice.

“The government told us at the beginning this would last four days,” she said. “Many people were not prepared.”

Denial of responsibility! Web Times is an automatic aggregator of the all world’s media. In each content, the hyperlink to the primary source is specified. All trademarks belong to their rightful owners, all materials to their authors. If you are the owner of the content and do not want us to publish your materials, please contact us by email – webtimes.uk. The content will be deleted within 24 hours.
Canadacanada coronaviruscanadianscoronavirus outbreakCOVIDcovid 19covid 19 canadainteractive
0
Share FacebookTwitterGoogle+ReddItWhatsAppPinterestEmail

How Amazon Workers Beat The Union Busters At Their Own Game