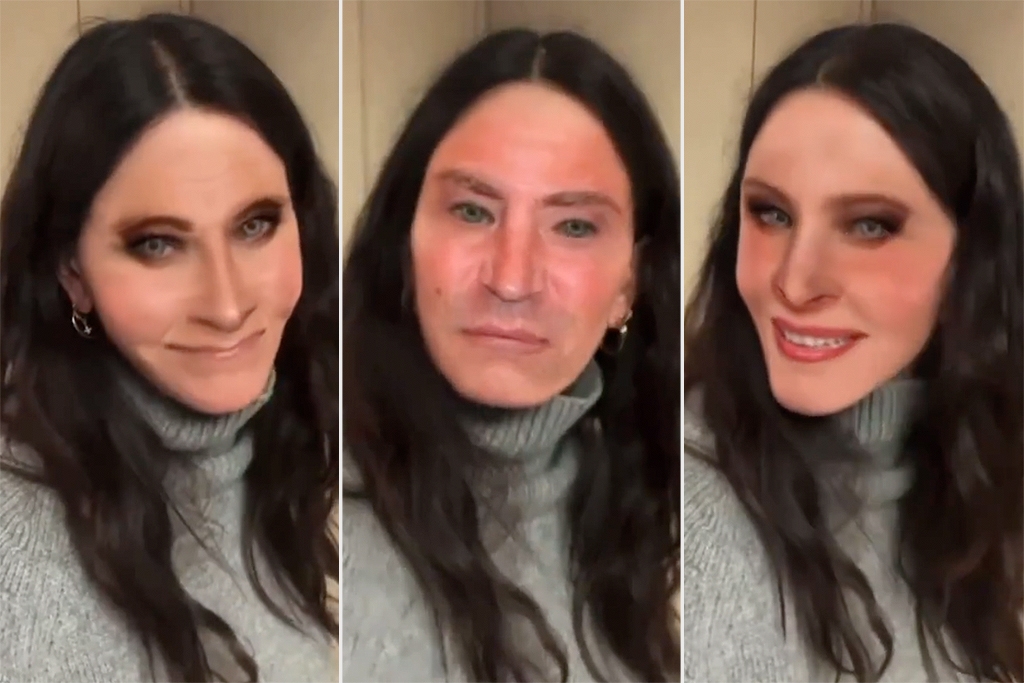 Courteney Cox is trying out the latest Instagram trend, which lets users apply a filter that will make them look like their favourite Friends character.

“Apparently there’s a new Friends face app,” Cox, 57, says in a video posted to her Instagram page. “Let’s check it out.”

First up, she tried the Ross filter. “Really? I don’t look anything like Schwimmer,” Cox said, mimicking his voice.

The Emmy nominee loaded up LeBlanc’s Joey Tribbiani next.

“Hi! How you doin’?” she drawled, copying Joey’s famous pickup line. “Oh, looks good with an earring. Or two.”

When she got to her third face, though, Cox seemed puzzled. “Oh hello,” she laughed. “Who is that? Is that Monica? Not sure. Rachel? I have no idea. This is one of the worst apps I’ve ever seen, but OK.”

She moved onto Monica next, quickly taking issue with the filter’s eyebrows.

“Is that me? OK, I think my eyebrows are a little different … Rachel? Hmm, I don’t buy it,” she said.

Cox then applied the Chandler filter declaring he “has rosacea” before moving onto Phoebe.

She returned to her Monica filter again to have another look. “This is the worst mouth of anyone, so it’s not Jennifer or Rachel because she has a gorgeous mouth. Is this me?” she asks again. “I feel terrible about myself, bye.”

“This is hilarious,” actress Mira Sorvino commented with Vine star Manon Matthews declaring Cox’s impressions of her fellow co-stars as “Dead on.”

Cox recently admitted she initially tried to combat aging by using various “injections” and other treatments, but is now attempting to grow old gracefully.

“There was a time when you go, ‘Oh, I’m changing. I’m looking older.’ And I tried to chase that (youthfulness) for years,” Cox told The Sunday Times. “I didn’t realize that, oh s—, I’m actually looking really strange with injections and doing stuff to my face that I would never do now.”

Cox said in a 2017 interview she got all her fillers removed and was learning to be comfortable with her natural appearance.

“You need movement in your face, especially if you have thin skin like I do,” Cox told New Beauty magazine. “I’ve had to learn to embrace movement and realize that fillers are not my friend.”

Cox has been nostalgic about her time starring on Friends, but admitted earlier this year she had no memory filming some of the series’ episodes.

“I don’t remember filming so many episodes,” she told Today’s Willie Geist last month. “I see it on TV sometimes and I stop and go, ‘Oh my God, I don’t remember this at all.’”

Meet Ai-Da, the first robot that can paint like an artist – National