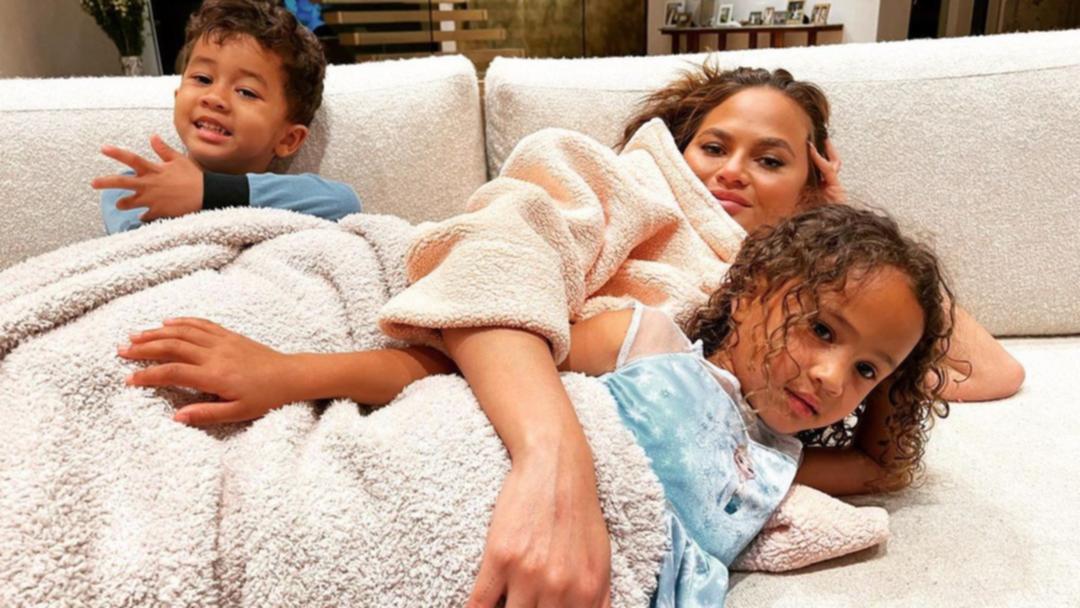 Chrissy Teigan has shared the news that “everything is good” in her ongoing journey to become pregnant again through IVF.

It has been an emotional road for Chrissy, 36, and her husband, All Of Me singer John Legend, 43, since the couple lost their third pregnancy in 2020.

In February, Chrissy revealed on Instagram that she was resuming IVF treatment in the hope of expanding their family.

For more Celebrity related news and videos check out Celebrity >>

A month on, the chef, TV personality and entrepreneur has shared that she has finished this round of IVF.

“Everything is good. I finished my IVF part, so I feel so much healthier and so much better with that,” Chrissy told Entertainment Tonight.

Chrissy has been open about her IVF journey and struggles over the past decade.

Chrissy and John are the parents of two children, Luna, five, and Miles, three.

They lost their third child, a son, halfway through Chrissy’s pregnancy in 2020.

All three pregnancies were created through IVF.

In February, she wrote to Instagram: “Hiiii. I posted about it in my stories, but I wanted to let you guys know I’m balls deep in another IVF cycle to save as many eggos as I possibly can and hopefully make some strong, healthy embryos.

“I honestly don’t mind the shots.

“They make me feel like a doctor/ chemist…but the bloating is a b****, so I humbly beg you to stop asking if I’m pregnant because while I know it’s said with excited, good intentions, it just kind of sucks to hear because I am the opposite of pregnant!”

Chrissy also made her stance clear on asking women if they are pregnant.

“But also like please stop asking people, anyone, if they’re pregnant,” she wrote.

“I said this in the comments and got yelled at because the internet is wild.

“But I’d rather be the one to tell you and not some poor woman who will look you in the eyes through tears and that’s how you finally learn.”

Prior to her update, the celebrity chef had shared an image of IVF injectable medication to social media, alongside the caption: “Here we go again.”

The image was accompanied by an animated crying uterus sticker and the caption, “Lol”.

Chrissy has spoken publicly about her previous fertility struggles, including her pregnancy loss, postpartum depression and experiences with IVF.

In October 2020, she shared the news she and John had lost their son halfway through her pregnancy at 20 weeks.

They had named him Jack.

“We were never able to stop the bleeding and give our baby the fluids he needed, despite bags and bags of blood transfusions. It just wasn’t enough,” Chrissy began on Instagram. “To our Jack – I’m so sorry that the first few moments of your life were met with so many complications, that we couldn’t give you the home you needed to survive.

“We will always love you.”

Prior to this, Chrissy tweeted about her IVF journey in August 2020.

She wrote to followers: “I hope this gives anyone out there some hope.

“IVF was an amazing choice for us to be able to make.

In 2018, soon after Miles was born, Chrissy spoke to People about IVF, sharing that Luna and Miles were “made” at the same time, despite being two years apart in age.

“Miles was actually made at the same time as Luna,” she revealed.

“They were sharing the same little petri dish together. It’s crazy.”

Abbie Chatfield causes a stir with Italian media: ‘Have all these angry Italian men after me’

Denial of responsibility! Web Times is an automatic aggregator of the all world’s media. In each content, the hyperlink to the primary source is specified. All trademarks belong to their rightful owners, all materials to their authors. If you are the owner of the content and do not want us to publish your materials, please contact us by email – webtimes.uk. The content will be deleted within 24 hours.
celebrityChrissy TeigenEntertainmentLifestylePregnancy & Births
0
Share FacebookTwitterGoogle+ReddItWhatsAppPinterestEmail

How To Get Rid Of Dark Undereye Circles, According To Dermatologists