Cardi B deletes Twitter after Grammys feud with fans: ‘I HATE YOU’ 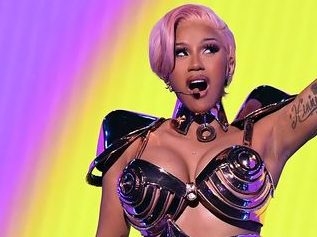 Cardi B deleted her Twitter account after getting into a heated tirade with fellowers who criticized her for ditching the Grammys.

The pop star, who was nominated for Best Rap Performance for Up, was a no-show Sunday night and fans were miffed she skipped the awards ceremony in Las Vegas.

“I bet your son wouldn’t like for you to be on your ass while teasing us fans and never dropping music,” one devotee chirped, per Fox News, to which she responded, “I hope your moms die.”

In a separate tweet, the 2019 Grammy winner labelled her haters “so f—ing dumb” for lambasting her decision to stay home with her two children.

“My thing is, why hype us up if you know (you’re) not going (to the Grammys) from the jump?” one fan whined. “(Cardi) needs to take her fans more seriously (because) this is getting ridiculous, I’m sorry.”

“When did I hype y’all up? Where and when did I ever (give) hints? Like are you okay,” Cardi blasted critics in the recently-deleted screed. “I’m not going to (an) award show if I don’t got a new song to perform Or my album ain’t out.”

The rapper also lashed out when one detractor alleged her child is autistic.

“Do you kiss your (autistic) child with that mouth?” the troll tweeted.

“None of my kids are autistic,” Cardi replied. “Don’t project (what) u got on my kids.”

Her tantrum ended with a scathing, “SUCK MY D—,” before she deleted her account.

She later added, “I be wishing I could catch y’all so I could kill y’all with my own f—ing hands.”

One Idaho complainant called the pair’s outfits “absolutely disgusting,” according to WFAA in Dallas, while another asked why Dr. Seuss’ children’s books are being pulled from shelves over insensitivity to Blacks and Asians while Cardi was allowed to “sing about her (WAP) on national television.”

“I am mortified for all who just witnessed what has happened to our society … unacceptable!!” one person tweeted, while another wrote, “Absolutely sick that’s allowed on primetime TV.”

“Slang me so hard almost made me fart,” Cardi tweeted last year in response to a fan who reshared a GIF of their kinky stage romp.