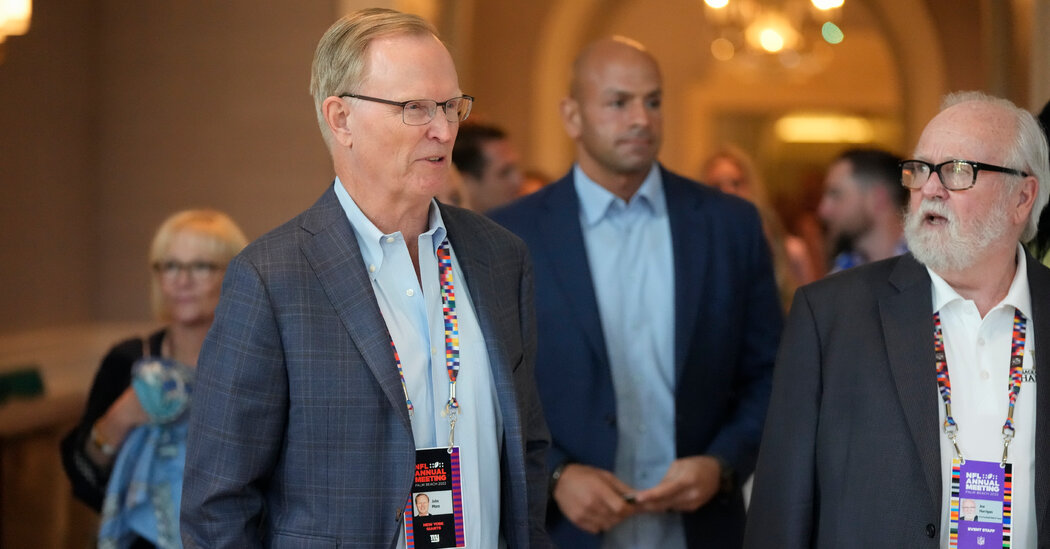 The N.F.L. is expected to argue that the Flores case is an internal league matter and should be heard by an arbitrator, not a federal judge.

The Flores case once again laid bare the fact that the N.F.L., after decades of efforts to increase the diversity of its coaching and executive ranks, has just three Black head coaches — the Pittsburgh Steelers’ Mike Tomlin, the Houston Texans’ Lovie Smith and the Dolphins’ Mike McDaniel, who identifies as biracial — in a league predominantly populated by Black players.

A wave of scrutiny. The most popular sports league in America is facing criticism and legal issues on several fronts, ranging from discrimination to athletes’ injuries. Here’s a look at some of the recent controversies confronting the N.F.L., its executives and teams:

A demoralizing culture for women. After the 2014 Ray Rice scandal, the N.F.L. stepped up its efforts to hire and promote women. But more than 30 former staff members interviewed by The Times described a stifling corporate culture that has left many women feeling pushed aside. Six attorneys general warned the league to address the problems or it could face an investigation.

Sexual harassment claims. Daniel Snyder, the owner of the Washington Commanders, is the subject of an N.F.L. inquiry after sexual harassment allegations were made against him by former employees. In July, the league fined the franchise $10 million after an investigation into allegations of harassment in the team’s front office.

Flores was fired by the Dolphins in January and, after failing to land another head coaching job this off-season, was hired by Tomlin and the Steelers as a senior defensive assistant/linebackers coach. Tomlin said he was in “continual conversation” with Flores after the lawsuit was filed.

“I wanted to support him as a member of the football coaching fraternity, and really just informal discussions,” Tomlin said, adding that the conversation about hiring Flores in Pittsburgh resulted from those talks. “And it really moved rather quickly to be quite honest with you. We didn’t breach the subject until all the head jobs were filled.”

On Monday morning, Tomlin said he was not confident that the league’s next steps would lead to better outcomes. Later in the day, the league announced that it would keep the Rooney Rule, which was implemented in 2003 to compel teams to interview nonwhite candidates for head coaching and executive positions. Commissioner Roger Goodell had said before the Super Bowl that the league would consider overhauling the rule. According to the N.F.L. minority coaching hires increased to 39 percent, up from 35 percent, across all coaching positions in the 2021 cycle. The league also decided to include women in Rooney Rule requirements for head coach and general manager openings. The rule will now stipulate that each team must conduct in-person interviews with two external candidates who are people of color or women, or both, though it has the potential to create a loophole that could actually decrease the number of candidates of color interviewing for top jobs.

The N.F.L. also announced the creation of a six-person diversity advisory committee. Its members include Rick Smith, the former Houston Texans general manager, and Peter Harvey, the former New Jersey attorney general who advised the league on its 2017 investigation into domestic violence allegations against Dallas Cowboys running back Ezekiel Elliott.

Lovie Smith, who spent 11 years as a head coach of the Chicago Bears and the Tampa Bay Buccaneers before being hired to lead the Texans, said the only thing he can do is hire more coaches of color and hope that other teams and their owners do the same.

“We all have to look at what we can do,” Smith said. “We can put more guys who look like us in positions to show exactly who they are. Then the owners can decide who they want leading their franchises. That’s the only question those 32 guys can answer.”

Companies bet employee benefits will help them in ‘Great Reshuffle’