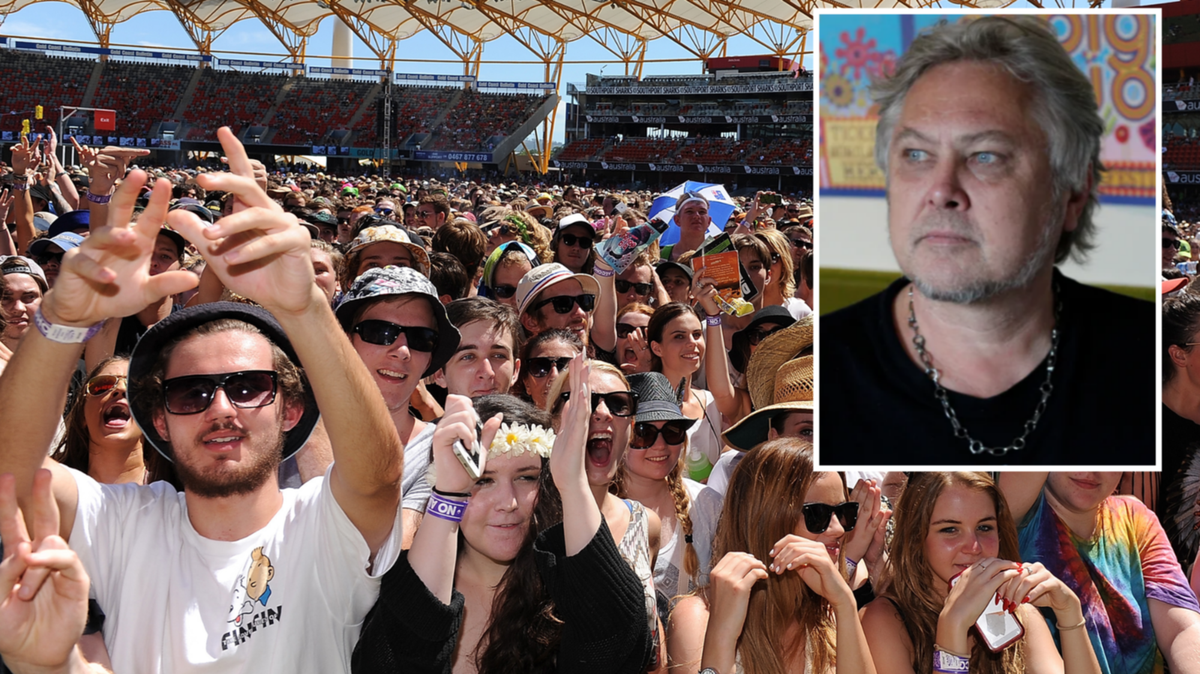 The co-founder of one of Australia’s most beloved music festivals, The Big Day out, has died at 64.

Ken West “passed away quietly and peacefully” on Thursday morning, his family said in a statement.

Along with Vivian Lees, West co-founded The Big Day Out in Australia in the early 1990s, creating the first alternative music festival of its kind in the country.

For more Music related news and videos check out Music >>

The first-ever Big Day Out in Australia, in Sydney in 1992, is now legendary.

The Violent Femmes headlined, but a then-newish grunge band called Nirvana blew the crowd away.

The success of the 1992 festival meant it went on the road in 1993, launching in Melbourne, Perth and Adelaide.

Going to The Big Day Out became something of a rite of passage for music-loving young Australians.

While it began as an alternative music festival, it eventually expanded out into other music genres, including the at-first controversial “Boiler Room”, an electronic dance music room that brought the ravers to the otherwise grunge-tinged party.

Over the years, The Big Day Out attracted every big rock and alternative act under the sun – from Nick Cave and The Bad Seeds to The Ramones, from Soundgarden to Iggy Pop.

Australian bands were always given space on the stage – from Powderfinger, Silverchair and Spiderbait to Regurgitator and You Am I.

The last Big Day Out was held in 2014 – and the end of a music festival era was over.

On Friday, West’s family paid tribute to a “father, husband” and “legend”.

“Our family would appreciate respect and privacy during this difficult time,” they said.

“Ken was big and noisy in life but passed away quietly and peacefully.”

His cause of death was not stated.

Adelaide-based band The Superjesus took to Facebook to pay tribute, saying West had a “monumental impact” on establishing its career.

“He gave us a chance when we were so young and put us on The Big Day Out when we had only performed two live shows prior,” they wrote.

“He made so many careers of so many now well known bands, he really did so much for Australian music.

“The Big Day Out was the biggest festival in the world for a while there … and by god did we have fun.

“Thank you Ken, we are forever grateful and we can’t wait to see what you do in the next life.”

Osher Gunsberg penned a lengthy tribute to West on Instagram on Friday, writing: “It’s difficult to put into words the effect Ken West had on music and culture in this country.”

“For 22 years he was the cornerstone of a cultural tradition, a rite of passage for young people in this country,” he wrote.“To be near him was to be standing in front of a firehose of ideas – but also the precise execution of those ideas, with zero compromise on vision.”

West is survived by his wife Cathy and son Oliver.

Denial of responsibility! Web Times is an automatic aggregator of the all world’s media. In each content, the hyperlink to the primary source is specified. All trademarks belong to their rightful owners, all materials to their authors. If you are the owner of the content and do not want us to publish your materials, please contact us by email – webtimes.uk. The content will be deleted within 24 hours.
EntertainmentMusic
0
Share FacebookTwitterGoogle+ReddItWhatsAppPinterestEmail

Inside an age gap relationship by US woman, 26, who fell for 54-year-old on YouTube