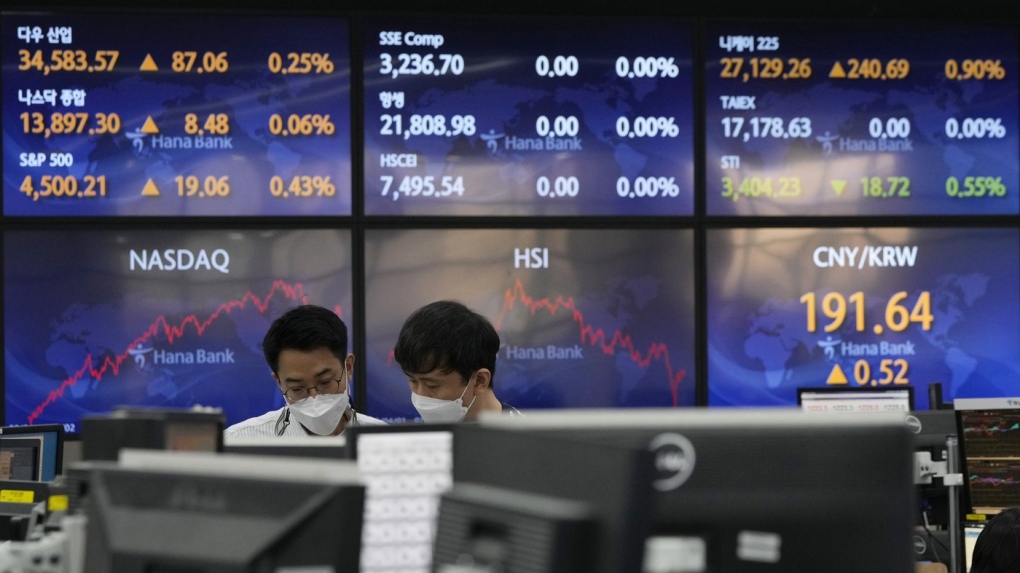 
Asian shares were mostly lower Friday as investors eyed the war in Ukraine and what the world’s central banks might do to keep inflation in check.


Investors have been weighing the latest updates from the U.S. Federal Reserve amid concerns about rising inflation. The Fed has signalled it is prepared to keep raising interest rates and reducing its stockpile of bonds and mortgage-backed securities in order to rein in the highest inflation in 40 years.


“Global appetite for risk in the short-term is still uncertain, with hawkish central banks weighing on sentiment. The situation between Ukraine and Russia continues to be a headwind, with markets now only looking for a major breakthrough to adjust current pricing,” Anderson Alves at ActivTrades said in a commentary.


On Wall Street, a late-afternoon rebound was led by technology companies. The S&P 500 rose 0.4% to 4,500.21, its first gain after a two-day slump. The benchmark index is still on pace for its first weekly loss in four weeks.


“The market is certainly having to digest a Fed that appears to be willing to be very aggressive in battling inflation,” said Rob Haworth, senior investment strategist at U.S. Bank Wealth Management.


Communication services stocks were among the biggest weights on the market. Twitter fell 5.4%. Computer and printer maker HP surged 14.8% for the biggest gain in the S&P 500 after Warren Buffett’s Berkshire Hathaway disclosed an 11% stake in the company.


The central bank is reversing course from low interest rates and the extraordinary support it began providing for the economy two years ago when the pandemic knocked the economy into a recession. It already announced a quarter-percentage point increase and is expected to keep raising rates throughout the year.


Traders are now pricing in a nearly 80% probability the Fed will raise its key overnight rate by half a percentage point at its next meeting in May. That’s double the usual amount and something the Fed hasn’t done since 2000.


Persistently rising inflation has been threatening economic growth. Business have been raising prices on everything from food to clothing and that has put more pressure on consumers. Some companies have been unable to offset the impact from inflation, even with price hikes.


Wall Street is concerned about consumers eventually pulling back on spending as higher prices become too difficult to digest. Price increases were responsible for a rise in consumer spending in March, otherwise, the results revealed a pullback.


A rapid increase in interest rates could also affect corporate earnings growth, though gauging that depends on how aggressive the Fed will be.


Russia’s invasion of Ukraine has also added to concerns about inflation. Energy prices have been particularly volatile and pushed gasoline prices higher.


U.S. benchmark crude slid 42 cents to US$95.61 per barrel in electronic trading on the New York Mercantile Exchange. It fell 0.2% Thursday, but remains up roughly 31% for the year. Brent crude, the international standard for pricing, gave up 61 cents to $99.97 a barrel.